The final circuits and their assembly

Due to the small size of the connectors, I make a mounting template on the same plate as the lamp making template. The connector positioning pins are in ø 0.3 nickel silver rod (experience will show that it would be better to make them in steel wire). 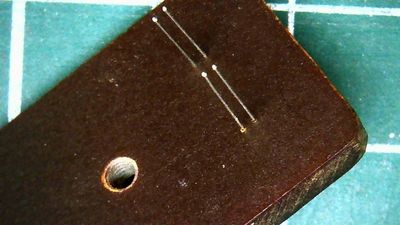 The circuit is placed on the template, the connectors are positioned. The whole is held by an M3 screw.

Note: the circuit is double both to save on the manufacturing price and to facilitate handling. 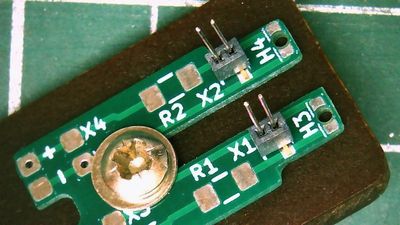 The connectors are soldered. Note the location for LED resistors, although for me the resistors are provided on the light strip. I’ll have to think about “shunting” them. Here is the circuit completed before separation of the two parts. 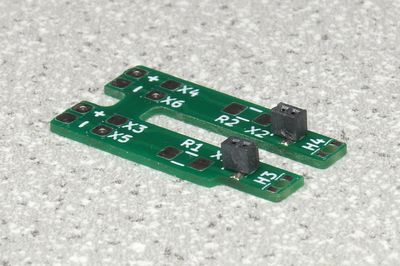 The two parts are separated and wired before installation.

It remains to ensure that these circuits can adapt to different cases. This coach was used for the first tests.

Well, electric jumper side, it doesn’t fit at all, even by reducing the PCB width as much as possible. I need to drill new holes closer to the centre of the coach by 0.5 mm. The “cheating” is hardly visible. 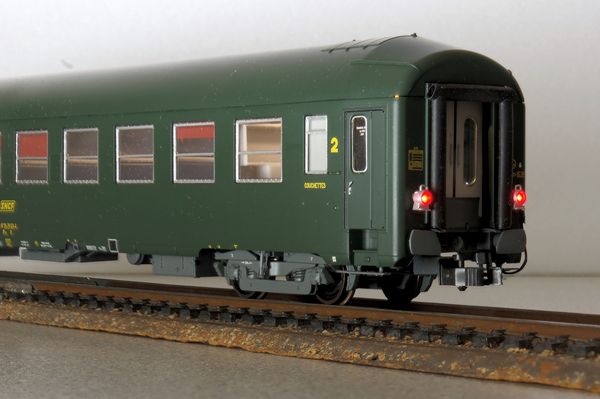 A light leak between the body and the roof, in the left corner, should be noted…

Test on DEV U50 REE coach

Here it is much easier, because the end wall is very flat. I used the same drilling template as for the UIC, changing its overall width, but I could have made holes closer to the centre to fall just above the lamp holders. Besides, I drilled new holes on the template for the next time. I also replaced an unfolded bellows with a folded one, an easy operation because this part is not glued. 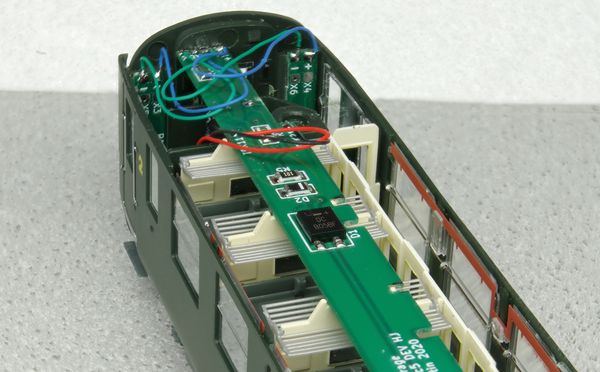 The new strip installed posed a difficulty, because I made it wider than the location designed by REE (see the notches at the level of the compartment partitions). The many frames under the roof had to be milled…

Here is the result. For this coach, I’ll detail the operations a bit more.

This coach requires a different drilling template. It has two parts, one of which — the blue one — fits into the coach’s gangway, and the other bears the holes. The template is set up. 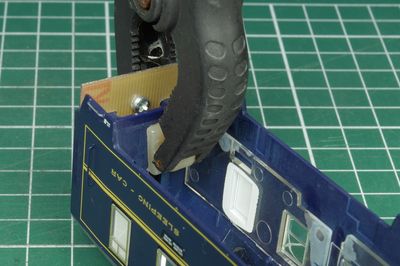 The holes are drilled. 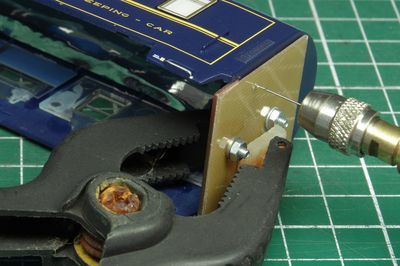 Appearance of the holes, which could not be drilled just above the lamp holders, but 0.8 mm to the middle. 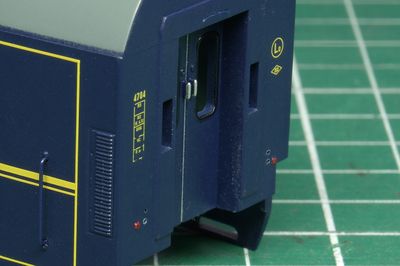 Positioning of the PCBs inside the coach. The fact that they are accessible from below greatly facilitates their positioning on the guide, which can be seen on the left. The gangway door glazing requires a small cutout to allow the connectors to pass through.

Interior view with the glazing put into place.

I’ll find later that the end of the right circuit, not cut (red rectangle), prevents the correct reassembly of the chassis. 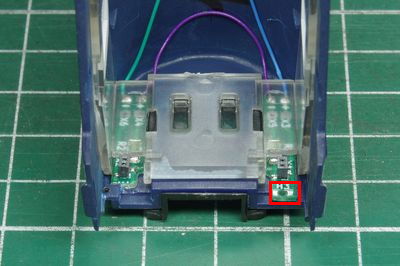 In addition to the circuit mentioned above, I realize that the platform of the interior fittings must also be shortened by about 1.5 mm. I do this with my jeweller saw. Here is the appearance before separation of the cut part. And finally the end result. This time, as I’m a little tired of making templates, I’ll try to drill the lamp clearance holes directly, using my horizontally mounted mini drill. Note: this is only possible because I have provided the support with an adjustment on the Z axis (vertical). The trickiest thing is to keep the coach in the vice without damaging anything.

Overview of the assembly. 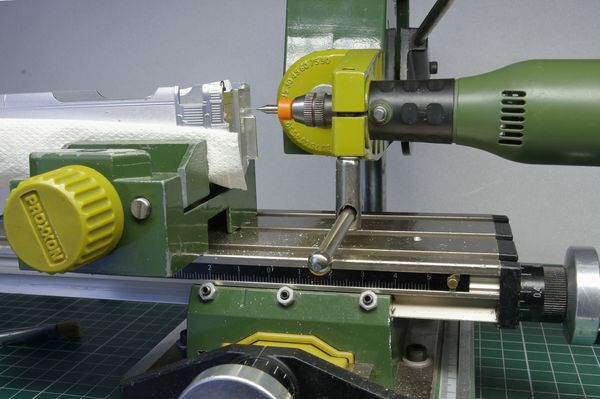 Close appearance of the holes made, right on the lamp holders. 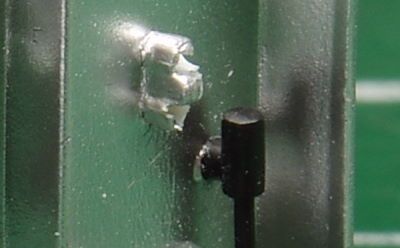 As with the MU ACME, the bottom access facilitates the installation of the PCBs. Ø 2 holes are drilled on each side, on the top of the body, for the passage of the wires. 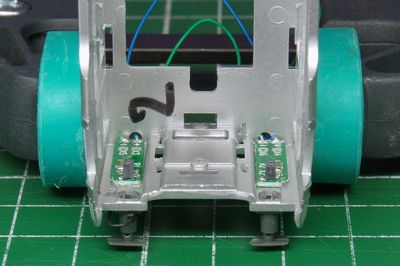 Those wires are connected to the lighting strip. 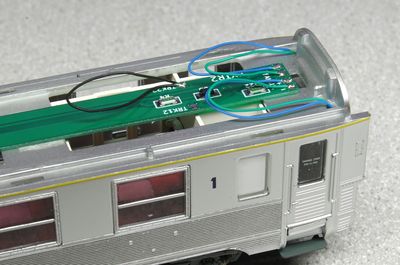 Small problem: we need a folded bellows, but HJ doesn’t provide one. I took a bellow from DEV REE, but of course the studs are not the same. However, the bellows must remain interchangeable: I therefore cannot glue it. I cut notches in the wall, thanks to the same assembly as for the holes.

The bellows lines and the platform, recovered from the HJ bellows, are permanently glued. 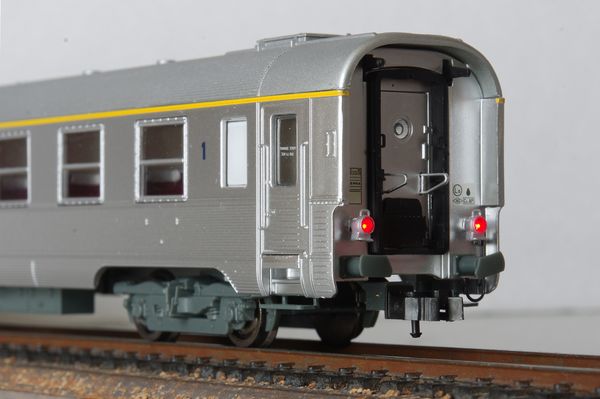 Here is an example of using lamp circuits… without a lamp! Indeed, I have foreseen the possibility of placing LEDs directly here for coaches equipped with built-in red lights. The A7Dt stainless steel DEV (HJ4101-2) will be used for this example.

Here is the circuit in this use. Centring is done by powering the LEDs and positioning them through the lamp. 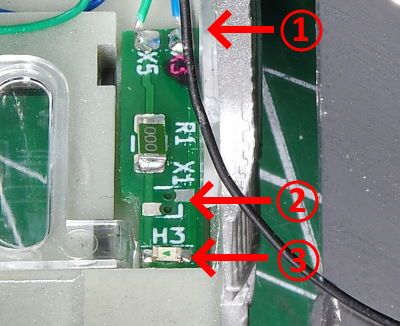 Inside view of the assembly. Here, unlike my usual practice, the lighting circuit is glued under the roof, as this makes the connections easier. Only the wires coming from the bogies are a little tricky to solder. The capacitor is also glued (Blu-Tack) under the roof, which makes it almost invisible from the outside. 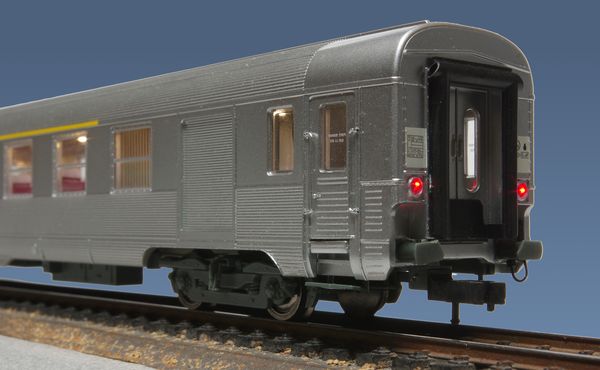