Mounting of a validation circuit

I just received the connectors! They are really very small! In comparison, a DIL integrated circuit support looks like a monster! 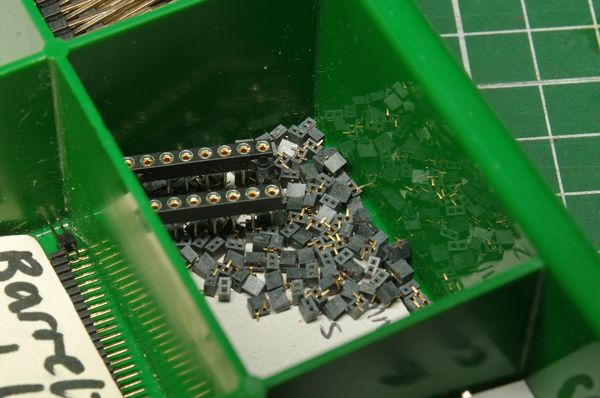 I quickly make a test circuit, by milling. It works well: the lamp easily plugs into the connector. For the desired brightness, a current of 0.6 mA is sufficient. The corresponding LED voltage drop is 1.72 V. An 18 kΩ resistor should be adequate for two lamps in series. 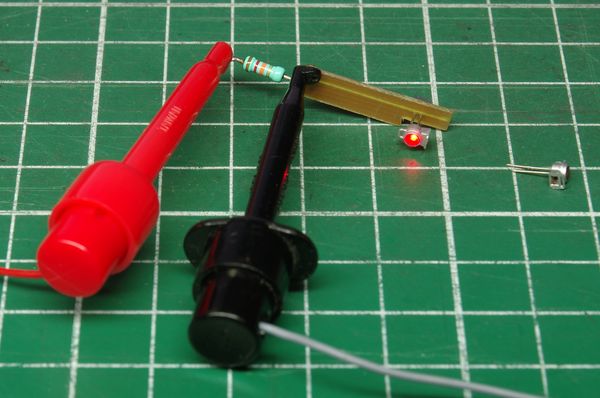 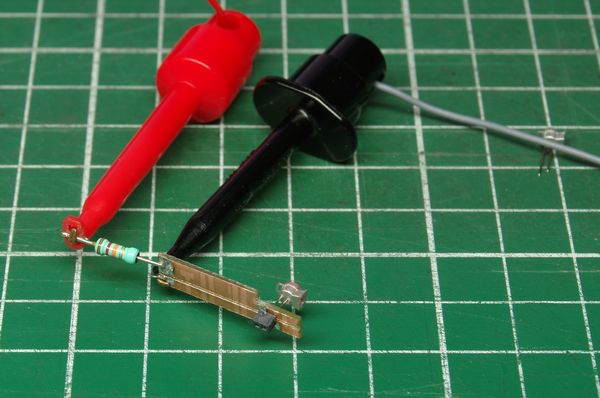 Preparation of the guinea pig coach

I chose a REE UIC B9c9x couchette coach for the first installation test. Its lighting strip is in place, and it has a location for the limiting resistor for the lamp LEDs.

To make ø 0.4 holes at a distance of 1 mm on the ends of the coach, with good precision, we clearly need a template.

Making and using the drilling template

The template is designed to fit on the coach’s gangway, once the UIC bellows have been removed, which is very easy. It is made of 0.8 mm epoxy; 1.6 would have been better for guiding the drill. The notches visible on the top are the result of trial and error, they are unnecessary. 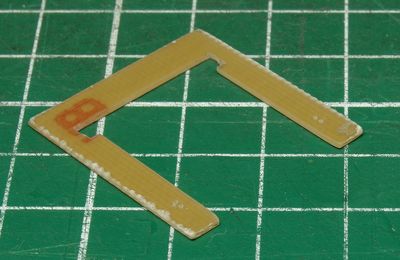 Installation of the template. I removed the lighting strip and the false ceiling to have a little more clearance. 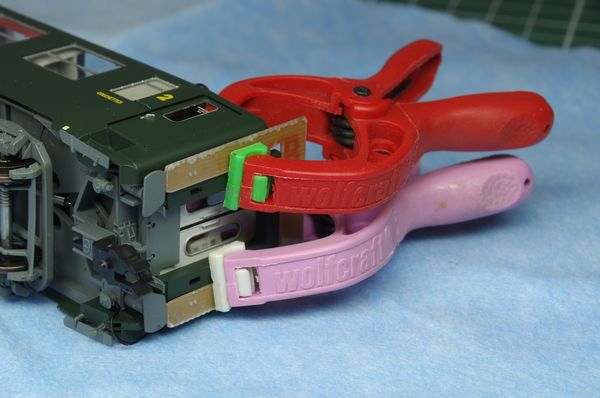 The holes in the end wall are made with a ø 0.4 HSS drill bit (too much risk of breaking a carbide drill bit), freehand with a mini drill. But the flexibility of this drill bit means that two holes are not quite perpendicular. Catching up with squarer. 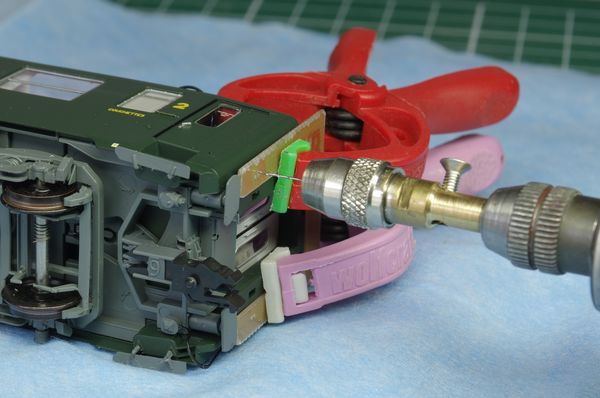 Result: the holes are very inconspicuous, aren’t they? 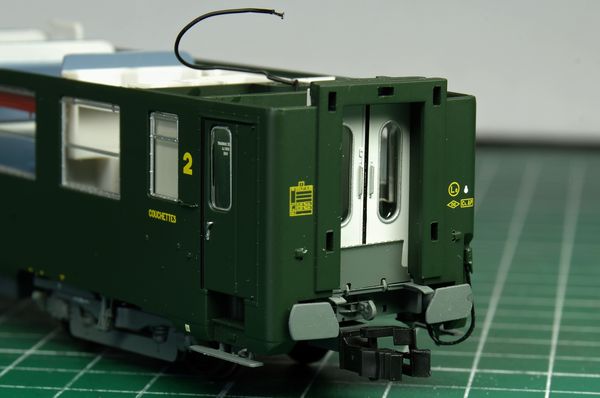 Assembly of the PCB

After several unsuccessful attempts, because it is very difficult to make the holes of the body and those of the circuit coincide, I make a guide: a ø 0.4 nickel silver rod whose ends are chamfered, bent in a U 1 mm wide, soldered onto a piece of epoxy. 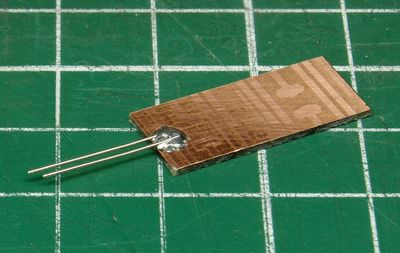 The guide is positioned into the body holes. I manage to plug the circuit on it from behind. It will thus be perfectly aligned. 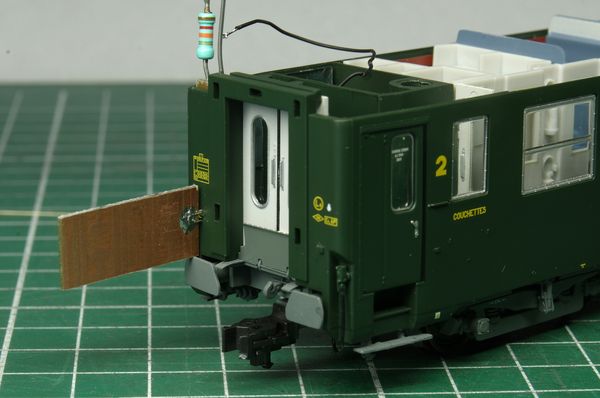 After this first try, I modify the circuit: I remove the resistor and I solder two flexible wires. I put a double-sided adhesive. Once the circuit is plugged into the guide, the protective paper is removed from the adhesive, and the circuit is pressed against the wall. The guide is removed. The wires are soldered to the strip.

Test with a lamp

Everything is in place for the test. All that’s missing is the lamp. 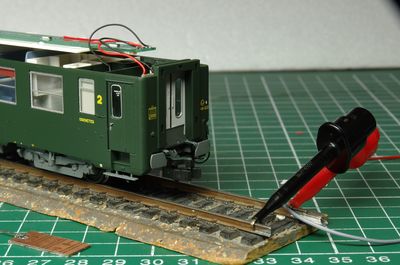 Beginning of the lamp insertion. The contacts are not yet powered. 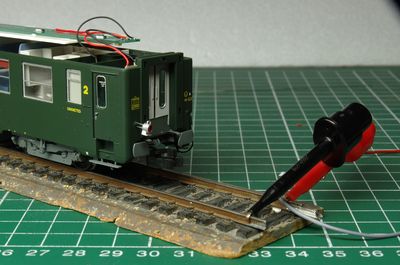 Insertion in progress: the lamp lights up. 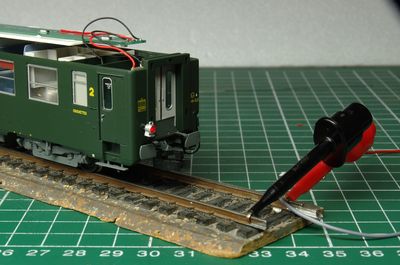 End of insertion: the lantern is in place. 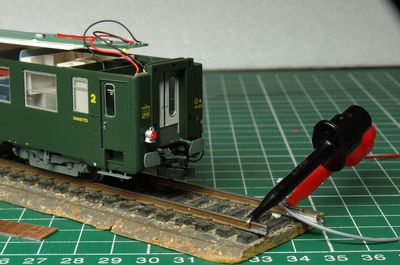 Preparation of the final printed circuit

Among other things, these tests showed me that the planned circuit was too wide and got stuck on the outside.

I can therefore correct and validate the final circuit drawing, which I’ll have etched by a service provider. In fact, this circuit consists of two parts, right and left, which will be separated after assembly of the components. 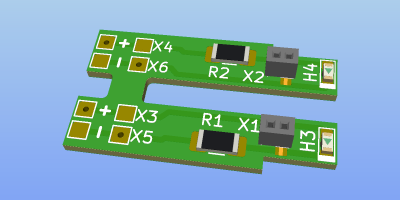 Note: the visible resistors are a priori useless, but they will allow a more general use of the circuit. I remind you that it can also be used for incorporated tail lights (see LEDs H3 and H4).

To be continued: acceptance and assembly of the final circuits on other coaches.