I’ve already installed the tail lamps I’ve just described, equipped with a 0603 LED, on a lot of rolling stock, especially goods. There is still something that bothers me: the problem is that equipped coaches can no longer be used except placed at the end of the train. For a while, I’ve been thinking about a lamp that would be removable. Only two small holes would be visible, in the absence of a lamp, for the passage of the electrical connections, at the level of the lamp holder. 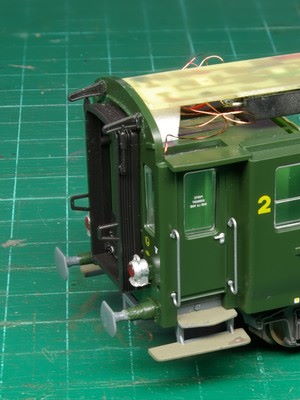 Equipement of a Roco Est coach. The lamps are fixed permanently.

I therefore need “board to board” connectors (pin header) with a 1 mm pitch in SMT mounting. Indeed, as already done for incorporated headlights, the printed circuit will be glued to the end wall of the coach. All devices (the connector only actually…) should be on the other side of the board.

Here is what I found: 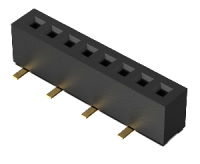 These connectors are interesting particularly because they can receive the male pins from the rear, through holes drilled into the PCB.

Once I’m pretty sure I can get this type of connector, I can start the project.

I’ll base this on the equipment of a UIC coach. I have many train compositions that end with such a coach. But there are also, jumbled together, DEV, WL MU, U, F, Rapide Nord, USI, etc. So I’ll have to make sure that the circuit can adapt to many different cases.

The original idea is to fit the rear of the lamp with a male connector that will plug into the coach’s drilled end wall. The male pins suitable for the female connectors found have a section of 0.3 × 0.3 mm. But, on second thought, I’m going to use round pins made of ø 0.3 mm nickel silver rod, which will allow for more discreet holes (a 0.3 mm square has a 0.43 mm circumscribed circle, which would require drilling to 0.5. Round pins will be content with 0.4).

Here are the first drawings of the project. On the right, (theoretical) verification of installation on a B5Dd2 UIC already equipped with embedded tail lights. In fact, I am thinking of combining the two possibilities on the same circuit: removable or embedded lamps. In addition, integration of series resistor, and two groups of power pads, in case the circuit needs to be shortened. 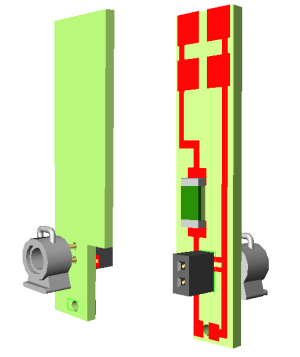 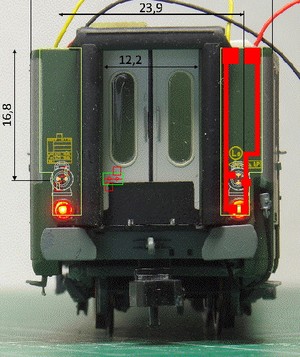 Note: most of the following photos are taken during making, using my digital microscope which is ultimately very useful for working with such small components. But the quality of the pictures is rather poor.

Due to the small size of the components, it is necessary to make a template to place and solder the LED on its pins.

In a fairly thick bakelite plate, I drill two ø 0.3 holes spaced 1 mm apart. A bit of clearance is needed to place and then extract the pins: I therefore slightly enlarge the holes with a squarer (drilling at ø 0.4 gives too much clearance). Two epoxy guides are glued on either side, separated by 0.5 mm, forming a groove to guide the LED. This groove is enlarged with a ø 1 mill bit near the holes to allow the passage of the soldering iron (SMD tip mandatory!). 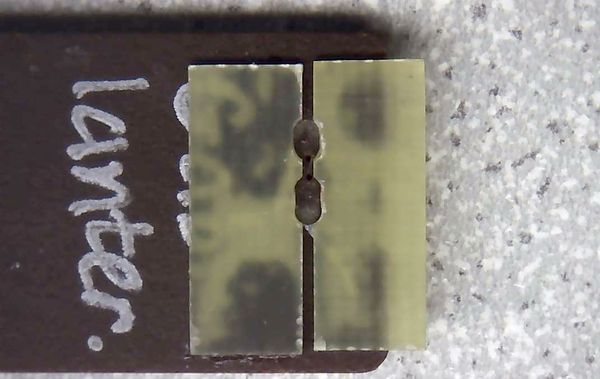 I cut two sections in ø 0.3 nickel silver rod; one 6 mm long, the other 7 mm. This difference in length has two reasons: to facilitate insertion into the lamp, and to remind the LED’s polarity.

One end is chamfered on sandpaper. 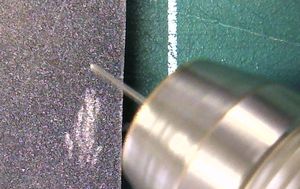 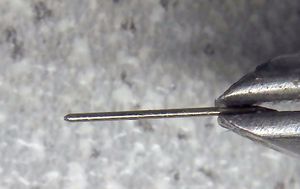 The other end is flattened by crushing it with a pair of flat pliers, then bent 90°, and finally shortened to less than 0.5 mm (in the photo, this is still a bit too long). 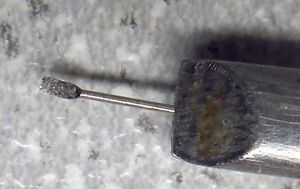 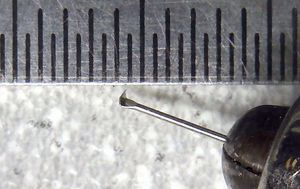 Finally, the 90° part is tinned. The excess tin should be removed, with a de-soldering braid for example.

Soldering of the LED

The two pins are introduced into the template, which must be placed high, because the pins protrude from the back. The LED is then placed, controlling its polarity (the LEDs used, although tiny, have a fairly visible polarity mark). We have to adjust the position as well as possible. By the way, I bought at the same time as these LEDs a special SMD tweezers made of non-magnetic steel. I welcome this, because any other steel object, scriber, screwdriver blade, irresistibly attracts the LED.

Two very small, but still too big, solder pieces (arrows), are placed near the pins. The LED is held with a wooden pick, and soldered. Immediately after, working test. 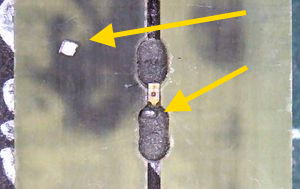 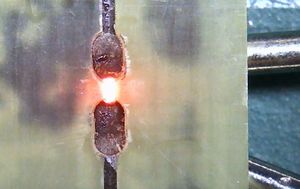 Mounting of the LED

Two ø 0.4 holes 1 mm apart are drilled at the bottom of the lamp. Warning: for centring, do not rely on the rear circle, which is not coaxial with the front. So drill from the front. 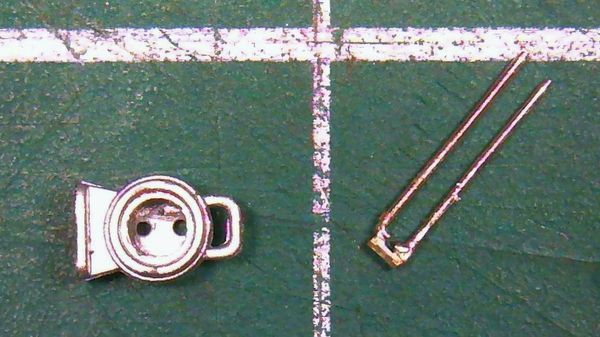 The equipped LED is inserted into the lamp. Pay attention to the polarity. I systematically place the anode (the +, the longer pin), upwards. 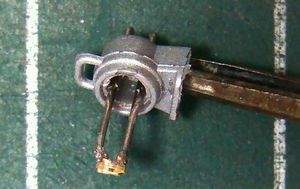 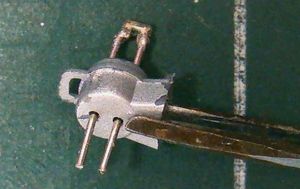 The whole is fixed in the vice, with the interposition of a piece of waxed paper, then a drop of CA glue is deposited, followed immediately by the installation of the “glass”, which will have the effect of chasing down the possible glue excess. The glue leaks slightly through the holes, which will help the pins to hold. 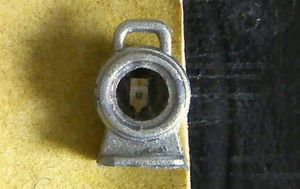 The perpendicularity is rectified by placing a wedge (wooden pick here) under the paper. Although the CA is supposed to cure very quickly, I prefer to wait a couple of hours. 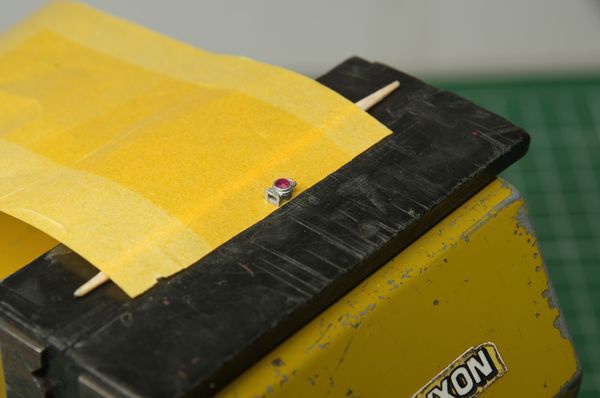 Here is the finished lantern. 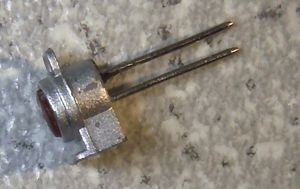 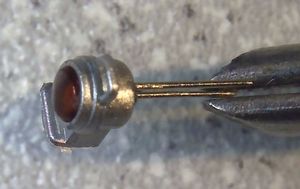 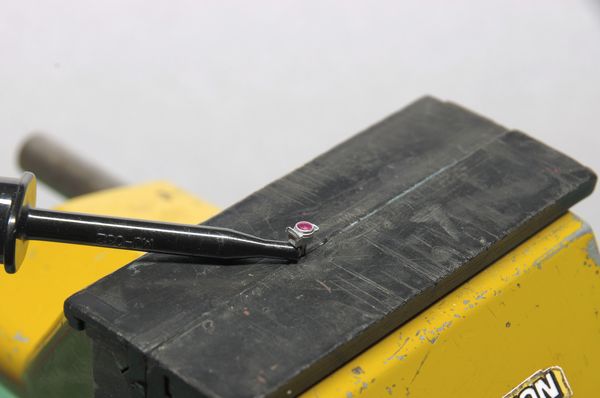