As a van is not illuminated a giorno, I make do with four LEDs, two in the middle of each luggage compartment and one at each end.

The strip has a location for three latching reed switches, one in the centre for the lighting (although it is so dim that it is almost invisible in daylight), and one at each end for the tail lights. No need to turn the van round by hand when changing direction… 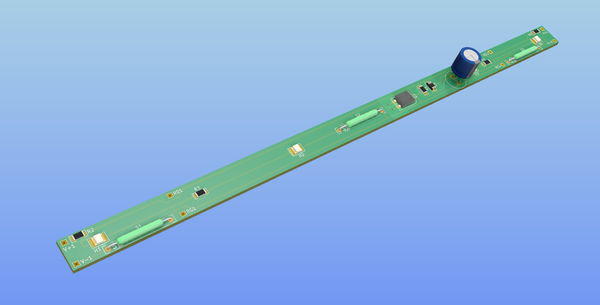 All devices are placed on the same side, as this strip will be stuck to the ceiling. This way, wires will lead directly to the LEDs of the tail lights. Only the bogie wires will connect the chassis and the body, but it is always possible to provide a connector to allow separation. The capacitor (220 µF) will be folded back onto the circuit.

Equipment of the bogies

The power is taken by very fine wires (15/100) wound on the axles. Classically (for me!), they are joined together on a small piece of self-adhesive copper tape on which is soldered the flexible wire going to the lighting strip. The last will go through a rectangular hole provided by Roco at the rear of the pivot and through a corresponding hole drilled in the base of the interior fittings. Note the pre-fitting for a second wire in case I decide to equip the bogies with conductive bearings.

The light guides are separated from the glazing part. A cylindrical piece is cut out and glued in place. Note that it is clear, not tinted red as originally. The LED circuits require the rear surface of the end walls to be somewhat levelled. Hollows must be filled with 0.5 mm thick, 2.5 to 2.8 mm wide pieces of polystyrene glued with Kibri liquid glue. 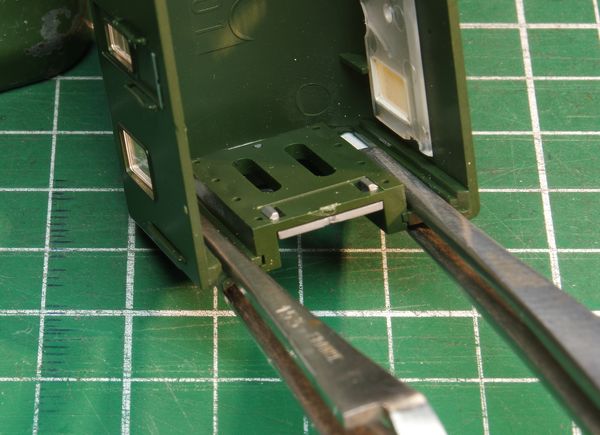 After being wired, the PCBs are stuck with thin double-sided tape. Then a piece of black electrical tape is placed on top, and the glazing is put back in place using flat pliers. 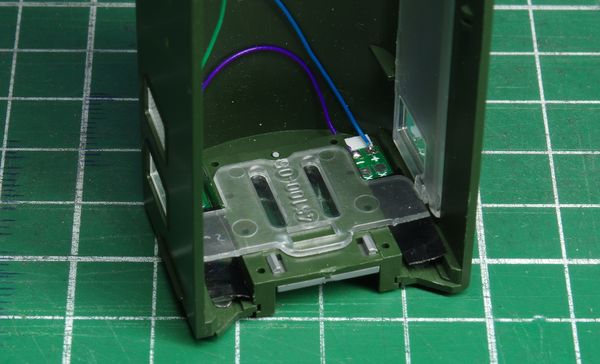 Note that this piece of glazing has two mechanical functions: it holds the side panes, and it has a mortise for hanging the chassis.

The wires coming from the tail lights are soldered on the strip.

Once this is done, the strip is stuck to the ceiling with thick double-sided tape and then the bogie wires are connected via 1.27 mm pitch mini-connectors.