Operations on the body

Working on the body is the most delicate. To work with sufficient precision, I make a wooden machining assembly (I've been over plywood, at least that of supermarkets, whose quality leaves something to be desired).

This assembly consists of two main parts, separable. The first, which I call the core, is inserted inside the body with as little clearance as possible. Its dimensions are 220 × 29.5 mm. The height is less critical. However, it must be sufficient so that the body does not touch the second part.

This second part, fixed perpendicularly to the first, serves to hold the assembly in the milling machine vice. Although its dimensions require less precision, it must be mounted perfectly aligned with the core. It is best to mill the bottom side after attaching it to the core. 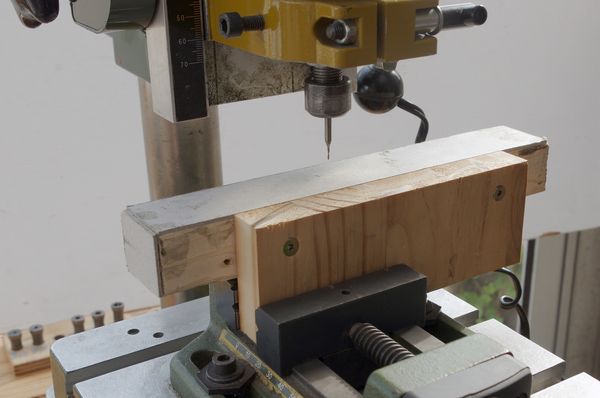 You can see that I had to compensate for a too big decrease in width and length by adding a layer of cardboard!

The core also serves to maintain the chassis for machining, with two wood screws passing through the pivot holes.

I guess many amateurs would do this with a scalpel. I am not very skilful in this matter. I therefore prefer milling, leaving a very slight excess of material which will be removed by sanding.

As the support is not perfectly horizontal, despite the care taken in its manufacture, I redo the zero of the milling machine for each relief to be removed.

This machining concerns the heating cables, the handrails and the plates “Inscriptions”, “Labels” and “Van not allowed to travellers”.

I am experimenting with a technique that is certainly long, but that I hope to be effective, which consists in practising around the bay frames a rebate about 1.5 tenths of a millimetre wide by 0.5 mm deep, with a ø 1 milling bit. Here is the principle: 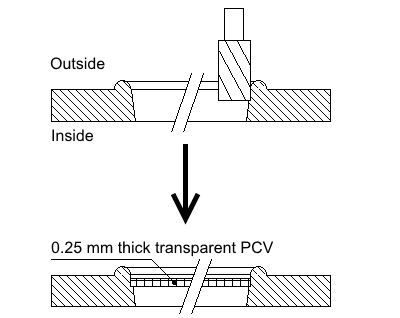 Cutting the windows requires some precision, but still less than trying to fit them into the frame left as is. And, as they suffer no constraint, they will remain perfectly flat.

Stopping the milling bit’s movement is not done by measuring distances, which would be quite illusory, but by ear! When I hear the milling bit going flush with the material, I consider that zero is reached. However, sometimes I went too far and cut into the frame. I filled these “skids” with ø 1 Evergreen rod resized on site. 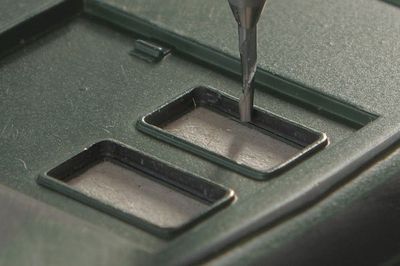 These holes are drilled to 0.5 mm diameter, to receive ø 0.35 steel wires. They are made following the rebates, on the milling machine, which makes it possible to respect a well-defined spacing: 11.5 mm for the ends and 8.5 for the “chef de train” doors.

The most delicate thing is to cut the doors. Compared to future UIC bellows (Roco salvaged from a UIC coach), the cut should be 22 mm in height × 13.5 in width. I used a thin saw disc. The vertical cuts are finished with the bocfil saw. As for the horizontal cut, it is finished with an X-Acto knife. Then, the edges are filed to obtain a cutting width of about 0.5 mm, which will be used for Evergreen walls.

The recess is based not on the actual value, but on the Roco gangway platform (see below). Its value is 3.5 mm. A “box” made of 0.5 mm Evergreen is glued around the door. Then, the whole is glued into the opening of the body end. What remains of the fixing holes of the old bellows is filled with 0,5 mm Evergreen pieces.

Here is an overview of some operations performed: 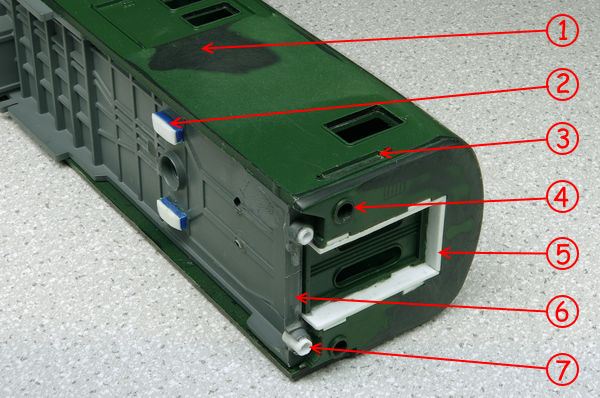 These wedges (1), located inside the body, are intended to hold the chassis at the right height. They are placed 6.2 mm from the bottom edge of the body and glued with gel CA. The distance is adjusted with a very simple small tool (3), consisting of two strips of 0.5 Evergreen, offset by the desired distance.

Bevelled clips (2) are glued, positioned relative to the chassis provisionally placed. The latter has been protected from possible glue overflow by pieces of adhesive tape. 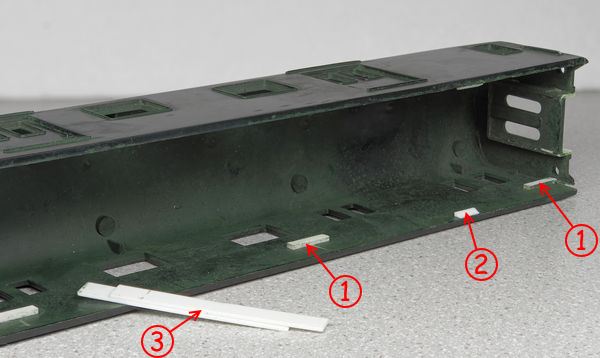 The chassis will thus be maintained simply but effectively between the wedges (1) and the clips (2).

The original fixation by rectangular tenons is not suitable; these tenons are levelled. A new fixing by cylindrical Evergreen pins is planned. For correct positioning, a drilling template must be provided for both the bellows and the car’s body.

This template consists of a 0.8 mm thick epoxy plate (but 1.6 is also suitable) where will be made ø 1 holes corresponding to pins, and two polystyrene or other plates, on either side of the first, to centre the template on the bellows and on the body. 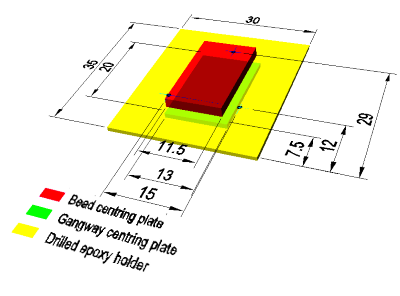 Here is the use of this template, body end side: 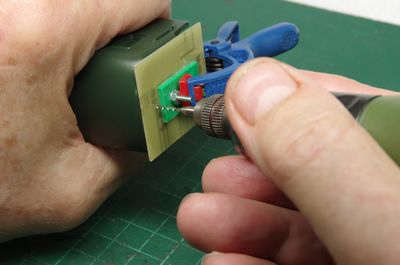 … and bellows side. The drill stop is set to prevent going through: 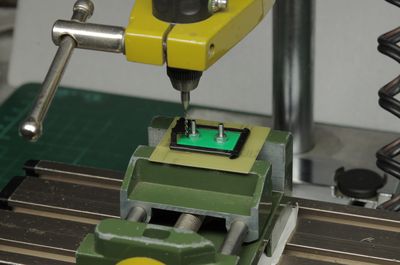 Once all the holes have been drilled ø 1, they are a bit enlarged with a hand mandrel, those of the bellows to ø 1.1, those of the body to ø 1.2 or 1.3, to facilitate the positioning of the ø 1 Evergreen pins. These are glued on the bellows. 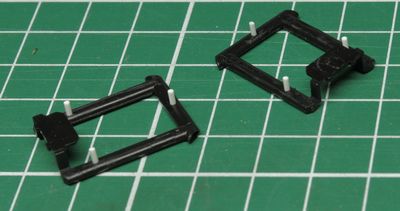 Sanding is done with wet sandpaper, successive grits 400, 600 and 1000. The areas to be treated in particular are those that have been milled, and the roof where is a visible moulding seal as well as a rest of sprue, right in the middle.

The handrails are glued with liquid CA before painting. In fact, I believe, but without any certainty, that these handrails were painted the same colour as the body, not of bright appearance as on coaches. In any case, in the photos, they are very little visible.