I designed circuits where all the LEDs (their number varies between 9 and 13) are in series. Thus, the current consumption will be minimal and capacitors of moderate capacity (100 or 220 µF) will be able to maintain the lighting very efficiently.

Well, DCC, with its relatively high-frequency alternating current (a few kilohertz), makes it very easy to use an electronic circuit called a “charge pump”. Such a circuit is capable of doubling or even quadrupling the supply voltage.

My by-four voltage multiplier test circuit presented a voltage of 60 V perfectly capable of powering 13 LEDs in series, and even more. Another advantage is that the energy storage capacitors are part of the pump circuit, and therefore do not need to be added. Finally, the design of the PCB is significantly simplified. Here is the schematic diagram used, with 12 LEDs in series:

The same assembly connected to a Lenz control unit provides 60 V, the latter being configured for a DCC voltage of 16 V.

Some pictures of the test. 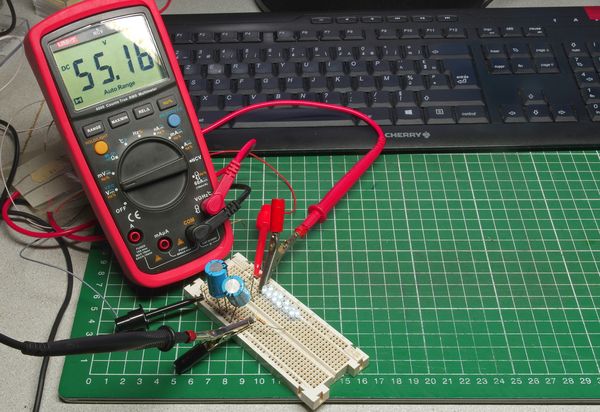 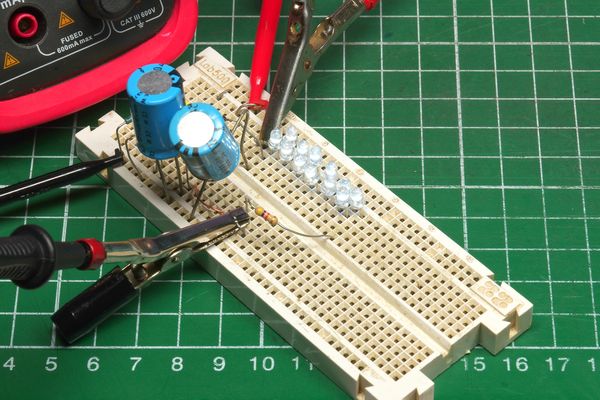 Here is the discharge curve obtained. If we consider that a voltage of 40 V is still sufficient, we can see that the operating time after power failure is at least 5 seconds. 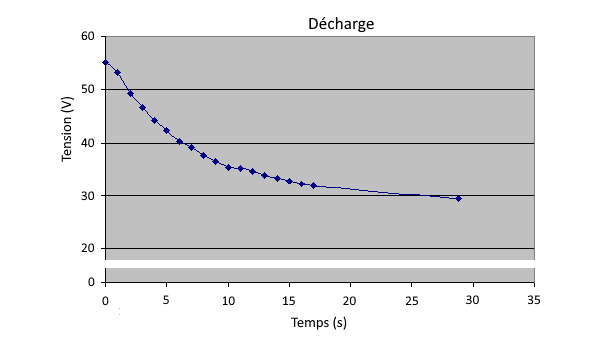 As already mentioned, there is one model for each category of coaches: B9 – B11, B4D – B5D / C5D, and A3B4 – A7. As each model concerns two coach types, the LED and capacitor locations are different and only the locations concerned and duly marked on the silk screen print will receive components. I did this to limit the number and therefore the price of the PCBs to be ordered. Of course, for a series production, even a small one, one circuit per coach type would be preferable.

In addition, each circuit is designed to supply and control rear lights. 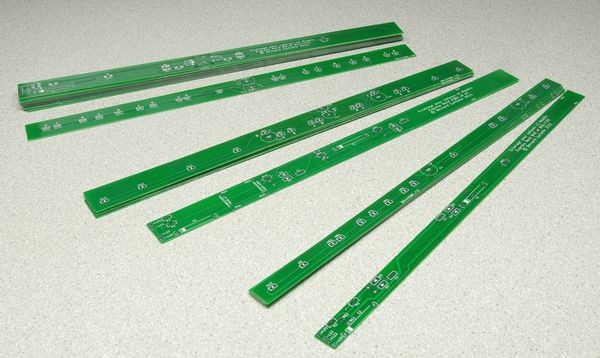 I immediately wanted to try one PCB, for a B11 coach. Here is the strip under test on the LED side. These LEDs have a colour temperature of 2400 K. The power supply wires come directly from my LokProgrammer. 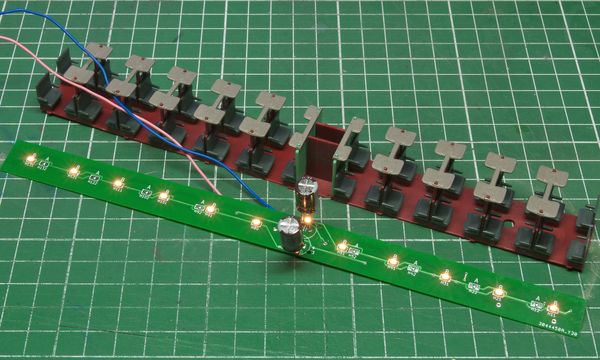 It is now placed on the interior fittings to check whether the capacitors are installed correctly.

Mounting into the coach

Little problem: the strip length has been calculated so that it fits exactly between the end walls of the coach. Error! There is a roof frame that comes just behind and gets jammed onto the strip. It will have to be shortened by 2 mm… For this first test, I simply milled the roof frame.

Note the routing of the wires on the sides of the capacitors to keep them away from the toilet windows. 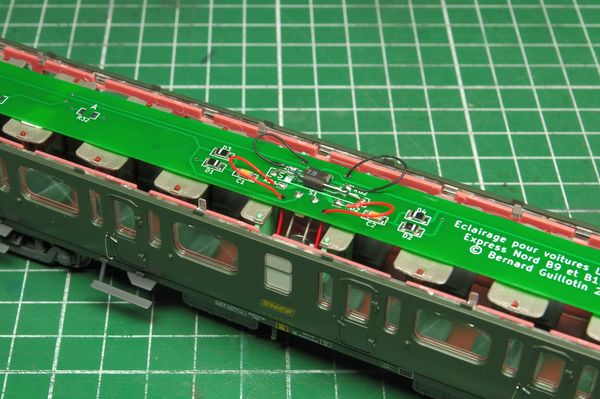 Here are two views of the coach reassembled.

This is definitely too pink… And there’s light leaking along the junction between the roof and the body. No wonder, since there are no chicanes there.

On the other hand, the lighting maintain time in the event of a power cut is very satisfactory. It must be said that the consumption of the strip is only 0.4 mA! I used 220 µF capacitors, but I could have used 100 µF.

Here is this strip next to its future coach. You can see the two capacitors that will take place in the van. You can also see the pieces of double-sided adhesive that will be stuck on the luggage racks, as well as on a support at the end of the van. 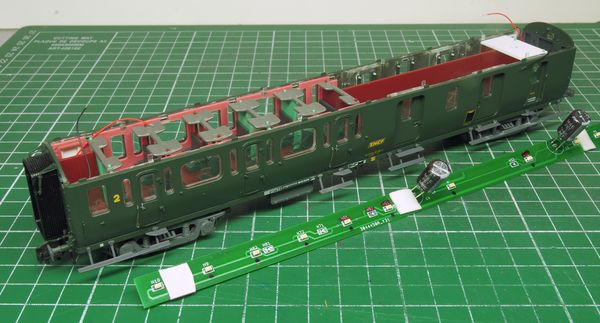 This support is made of 1 mm thick polystyrene. It fits over the partition pins, making it easy to install. The ø 3 hole is provided for the passage of the LED that lights the conductor’s compartment.

Note: the width of 23 mm is calculated to allow for the passage of anti-light leakage profiles, see below.

Below, the strip is now positioned on the coach, seen from the van side. I tried to glue Evergreen profiles along the strip to reduce light leakage, but this doesn’t work. 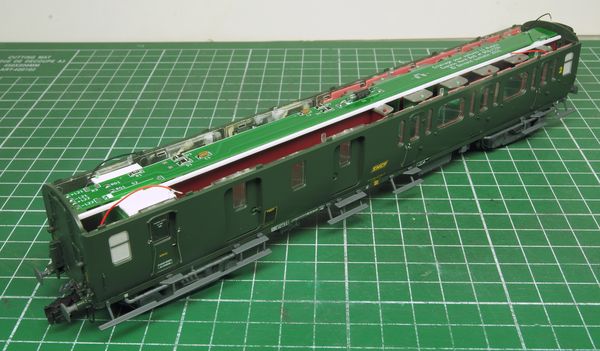 I used 3000 K LEDs instead of the 2400 K of the previous coach. The rendering is much better, even if it is not obvious on the photos.

Some photos. First, view from the van side.

Then, view from the 2nd class side.

Finally, same view, but coach placed off the rails, to show the efficiency of simple 220 µF capacitors. About 6 seconds elapsed from the track exit.

Another test to prevent light leakage

On the B4D, which succeeded the B5D in the workshop, I tried to place 2 × 1 mm profiles as close as possible to the edge of the roof. The only practical possibility is to glue them to the glazing protrusions I mentioned earlier. This only results in four small adhesive points along the entire length, but these parts will not be subjected to any mechanical stress. Here is one aspect of the assembly (Faller Super-Expert glue). 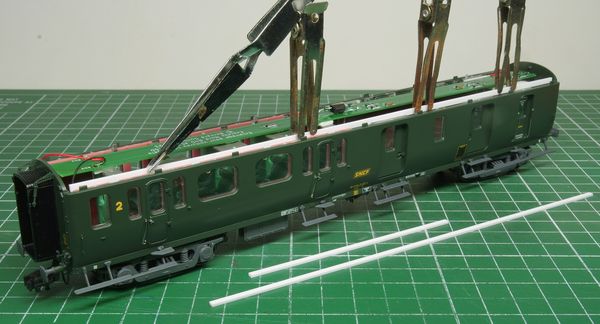 A closer view, then even closer by clicking on the photo. 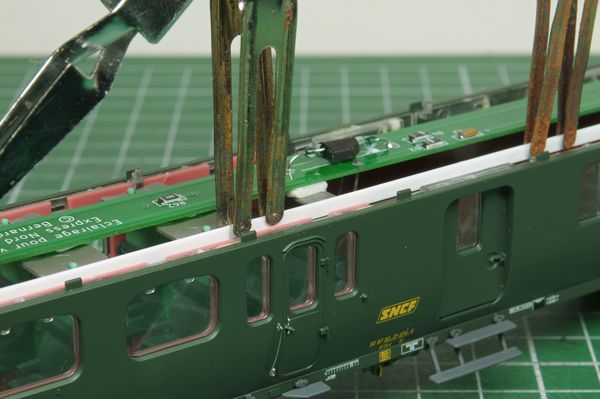 This device seems quite effective (coach equipped on the left, not equipped on the right), although the slightly larger roof gap on the right contributes to these leaks. I was thinking of possibly painting the profiles in black, but I don’t think that’s necessary.

Note: the coach on the left is equipped with 3000 K LEDs, the one on the right with 2400 K LEDs. The difference is much more visible to the naked eye than in this photo.

There are two cases: for composite coaches, there is a built-in light (the two small lights above are not transparent). For other coaches, lantern holders can be used. I did it for a B11, the most likely to be at the end of the train. Contrary to what I did recently for other coaches, the lamps will not be removable here.

Mounting an LED behind the B5D’s light

There is one difficulty: the light comes close to the floor. Therefore, a PCB on which the LED is located at the very bottom is required. Fortunately, the circuits I designed for removable lamps are also designed for this purpose. 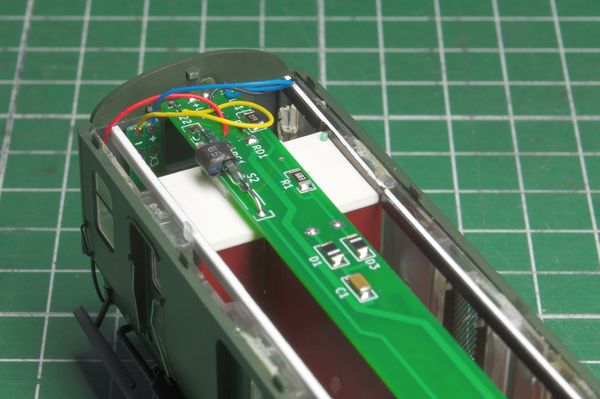 Click on the photo for a closer view of the circuit.

Another difficulty was to centre the LED on the light. On the other hand, the light is fixed by a square pin, which doesn’t not give the best visual effect, but it is not visible on the photo below. 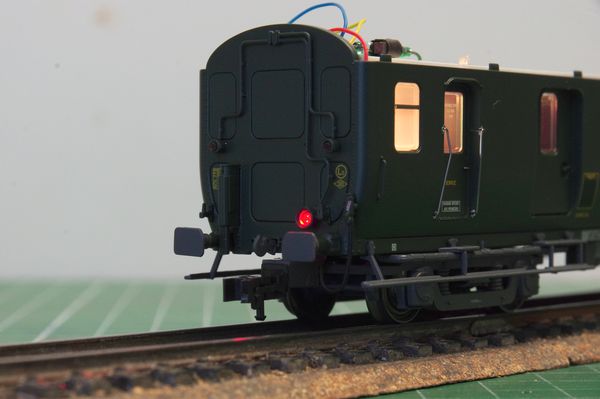 Mounting lamps on a B11 coach

These lamps originating from REE are equipped with a SMD 0603 LED, wired with 0.1 mm diameter varnished wire, as explained in this article, with one small difference: instead of coming out from below, the wires, stranded, pass through a 0.5 mm diameter hole drilled at the back of the lantern and then through another hole of the same diameter drilled in the coach’s body, 1 mm above the lamp holder.

The lamps are glued astride the lamp holders. This is not in accordance with reality, but gluing them by their back would have been too fragile.

The wire connection is made on the pads provided on the strip circuit. Finally, I should say “should have been made”, because I realised at the last moment that I had fitted the wrong end of the coach… This is all the more stupid as I usually design the location of a control reed switch at each end, and for once I didn’t do it, when there was all the necessary space. So I tinkered with a new track made with self-adhesive copper tape… 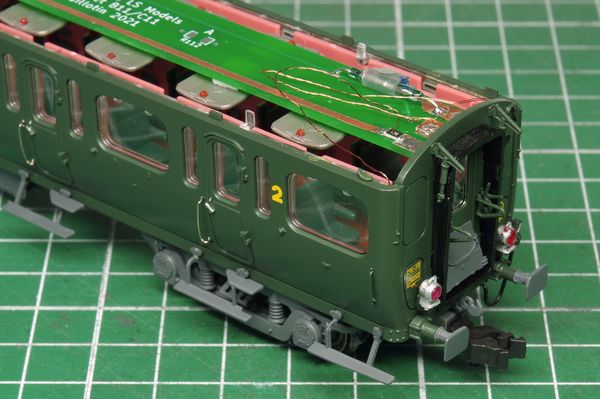 Click on the photo to see the lamps up close. You can see the wires between the lamp and the body. The lamp on the right has its paint peeling off.

View of the equipped coach. You can see the lack of paint on the lamps. 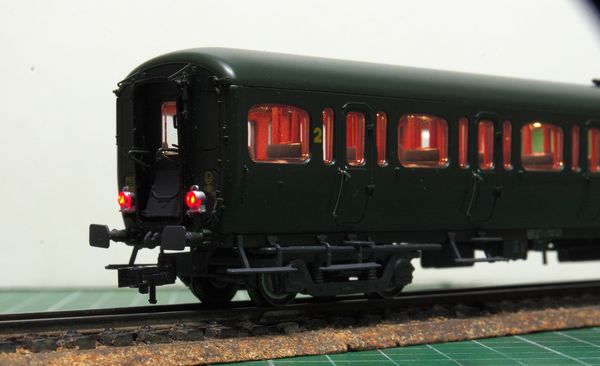