Very nice coaches. The body/roof junction is visible, but discreet and regular. A detail that spoils the good impression is the excessive width and lack of discretion of the (numerous) running boards. Indeed, their width reduced to 1:1 is more than 3.2 m, for a UIC gauge of 3.15 m! This is no doubt due to the need for clearance in curves and the passage of steam pipes. In any case, they will benefit from being weathered to make them more discreet.

The realization of these coaches still deserves a pat on the back when you see the multitude of railings and accessories fitted. The engraving of the axle boxes is remarkable: there is not only the Athermos logo, but also the name of the manufacturer underneath!

I don’t like the wall linings, which make them even thicker and too visible from the outside. Moreover, their old pink colour seems unlikely to me. The few interior photos in my possession (for B11s) show a rather classic ivory tint, and aluminium window surrounds. 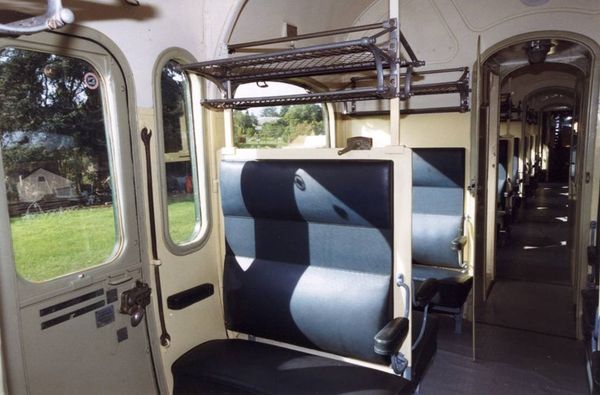 Unless, but this is unlikely, the TVT association, from which this photo was taken, has repainted the interiors of its coaches.

I noticed a few derailments in a counter-curve which was not particularly tight, however. Observation: the opposite bogies of two coaches derail because the coaches are tilting. This is because their buffers on the inside of the curve not only touch (which is not usually the case, it always remains more or less 0.5 mm), but are also pressed against each other.

I suspect a drawbar jamming problem. When I manoeuvre it by hand, I can see that if I push it slightly upwards, or leave it free, it behaves normally. But if I pull it down a little, it gets stuck. And not just a little: no matter how hard I push it (moderately!) it remains jammed.

After some investigation, the foot of the drawbar gets jammed on a protrusion just below.

The explanation for the derailment is now clear: when exiting the previous curve, one (or both) drawbar(s) does not return to the centre position but remains jammed. In the following counter-curve, the reverse traction eventually causes the two coaches locked together to derail.