A bundle consists of four pipes, in two layers of two, placed head to tail to prevent collars from colliding. The pipes of the first layer rest on planks of 1.5 mm square section to scale. There is a new layer of planks, then the second layer of pipes. The wedges are in the shape of a 3 mm side isosceles right-angled triangle (I have somewhat forced the dimensions for practical reasons).

Given the number of wedges to be made, 24 per bundle × 2 per wagon × 5 wagons = 240, I’ll have to find a simple and fast machining assembly. In addition, the distance between wedges will have to be fairly precise and constant so that the pipes remain parallel to each other, otherwise it might give the same effect as the architect Edifis’s home in Asterix and Cleopatra… Making an assembly template is therefore necessary. 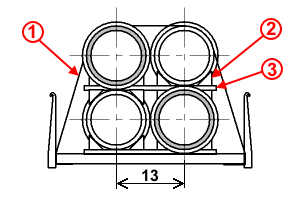 The wedges are sawn in 1.5 × 3 mm pine strip alternately at 45° and then perpendicularly by means of a mini-drill with a thin steel saw blade, installed horizontally in its stand, to make a kind of mitre saw. In the stand vice is placed a sawing template equipped with slides and stops, preferably made of plastic. 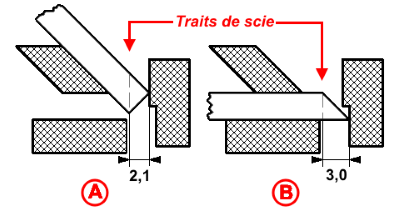 In the drawing above, the slides and stops are hatched. The strip to be cut is white. Once in two, one cuts according to A, and the next time according to B.

Gluing the wedges on the planks

A template will allow the wedges to be glued at a constant spacing, so that the pipes are parallel. This template consists of a rather thick (2 mm or more) polystyrene plate (1), on which thin slices (rings) of Evergreen ø 11.1 tube (2) are glued. 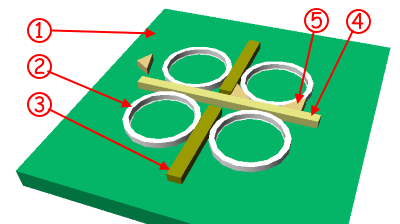 During gluing, these rings are kept at the correct distance by a horizontal spacer of 1.5 mm (4) and two vertical spacers approximately 2 mm wide (3). The gluing is done by applying a liquid plastic glue inside the rings with a brush. Once the assembly is dry, the spacers (3) and (4) are removed, the rings are adjusted with a file to be as thin as possible (about 1 mm), which will facilitate the installation and removal of the parts to be assembled.

For mounting / gluing, I proceed as follows:

On a sheet of rather rigid cardboard, I draw reference lines: the ends of a pipe, so spaced by 82 mm, and the position of two planks spaced 60 mm apart.

I fix the two planks on the cardboard base with a drop or two of Kristal Klear (this is a temporary fixing). One drop of the same glue on each diagonal side of the wedges, then I put the two pipes of the first layer, head to tail.

Then, in the same way, I glue successively the planks equipped with two rows of wedges, and the pipes of the second layer, head to tail compared to those of the bottom layer. Be careful not to tilt the assembly which is still fragile! 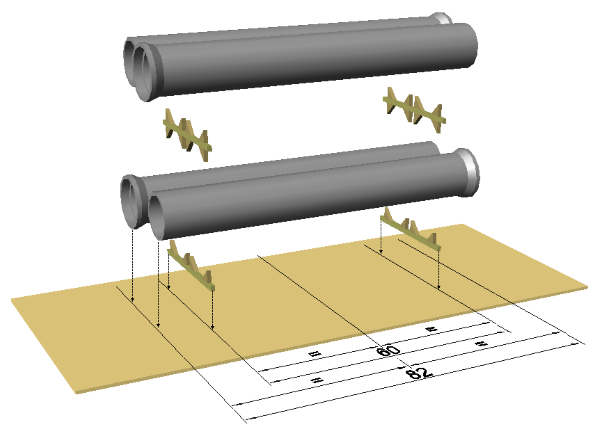 For the concerned wagons, the NEM standard indicates a mass between 90 and 120 g. But they have very different masses. The Vitrains are already more than 100 g, and therefore require no ballast. But the Roco is 55 g (for the DB one) to 70 g, which is very insufficient.

For ballasting, I first thought of steel tube pieces having a diameter as close as possible to the inside diameter of the pipes, which would make them as discreet as possible. But this diameter is 9.5 mm, while commercial tubes are ø 10 or 8. The first is too large, and it would have been necessary to bore the plastic, the second is too small. I finally chose sections of ø 6 × L 17 round steel, which give a theoretical mass of 6.3 g per piece. I glued a number (at least 4 for symmetry and balancing reasons) in the bottom pipes to reach a total mass about 100 g. The glue used is the Pattex 100% (without solvents).