The original idea : an article in La Vie du Rail

As I was walking through old documents, I came across this little article in La Vie du Rail No. 1151 of 21 July 1968, accompanied by the following photo.

To summarize, the article says:

The Genlis railway station has been receiving wagons from Pont-à-Mousson, each loaded with eight cast-iron pipes, of a unit weight of 2.5 tons. These pipes are intended for supplying the city of Dijon with water, through a 20 km long pipeline. 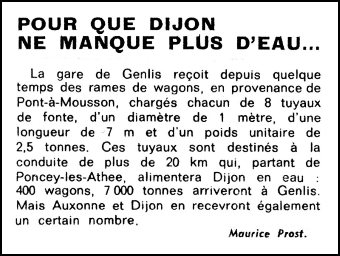 Interesting, isn’t it? The wagons seem to be of R8 type, which I own several units, of various brands and administrations:

A total of five wagons, all belonging to the EUROP pool, of course. Obviously, it does not make a train of a realistic length, but it will at least reproduce the photo of the article, with a time shift towards the mid-1970s.

Note: the main differences between types R8.01 and R8.02 — I mean in pre-1980 marking — are, on the one hand, the frame reinforcements which are tubular for the first and in beams for the second; and on the other hand the bogie type, Y19 nicknamed “German” for the former and Y25 for the latter.

Let’s go into a little research on the Pont-à-Mousson water pipes (a company that I knew during my studies in Nancy). The company still exists, but as a subsidiary of Saint-Gobain. According to the PAM Classic document, pipes with a nominal diameter of 1 m still exist. Their length is about 7.10 m, and their mass is 2.7 t: this perfectly matches the article’s description.