CC 65526 ​​Electrotren waiting for fan grill. Note that the rear air tank is present despite the mounting of an elongation coupling.

Mass: 427 g. It is an actual CC: all axles are driving. The two extreme axles are equipped with tyres but without current pickups.

Maximum current at wheel slip: 0.65 A @ 12 V DC. Even under about 5 V, the fan runs too fast. Red lights exist, but are not separated. The light intensity of the white lights is much too strong, that of the reds is OK.

The general appearance is very satisfactory. However, the radiator and fan photo-etched grid pitch is too wide: for the fan, the mesh pitch is 0.8 mm, whereas it should be about 0.3 mm.

On this model, the buffers should have a cut, not rounded, corner (as in this photo by Patrick Meunier). Too bad since the correct buffers exist and equip the era III model! 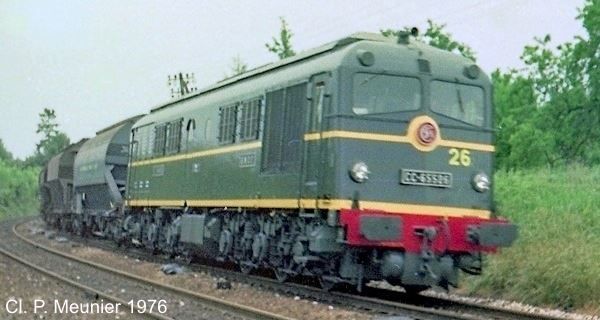 There are two additional complete buffer beams provided, the one with, the other without an air tank. I’ll have to see whether it will be possible to fit the tank on the rear NEM box, as I did for the LS Models BB 16500.

The printed circuit board

Here is the visible side of the circuit…

…then the hidden side.

The fan control is on pin 3 of the decoder plug (output C for a Lenz decoder). The fan motor is controlled via a BC135 NPN transistor. The LED resistors are marked 1.0 kΩ (102), but their actual value is closer to 1.2 kΩ. The red LEDs are SMD (surface mount devices), the white ones are classical diam. 3.