The only difference with “standard” boxes is the much higher weight of the locos, which requires stronger boxes, while limiting the number of models per box.

I therefore planned to strengthen the bottom with 4 mm thick hardboard, but perhaps thicker cardboard would suffice. The total height of such a box is increased by 4 mm, which brings it to about 60 mm. So, we can only put three of them in a Curver box, if we want to be able to overlay the boxes. Otherwise, no problem: the fourth box only exceeds 2 cm (less than 1 inch).

Changes in the bottom dimensions

As indicated above, the side height is increased by 4 mm, which gives this new diagram: 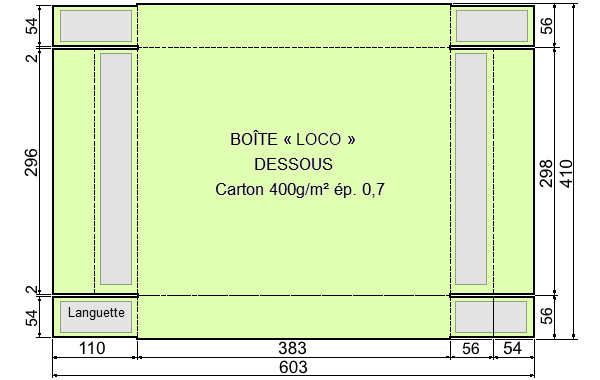 To facilitate gripping the models, I have provided wider dividers. The ideal would have been 10 mm, which would have allowed to store eight locos. It seems, after research on the Web, that there is no 10 mm extruded polystyrene, but it exists in 9 mm. See possible arrangement with eight places below. I still preferred the 20 mm, which limits to six the number of places per box. This is no worse issue for weight! I also kept the principle of plastic film grip used in most of the original boxes. This film protects the side walls of the loco against the risk of abrasion by rubbing on the dividers. 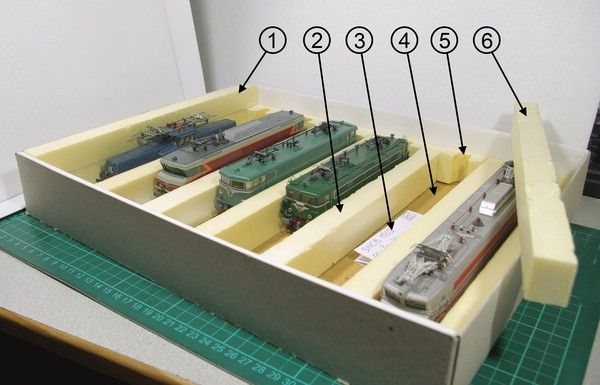 Note: for a question of aesthetics, I removed the protective films for the photo.

The bearing shims (#1 and 6) are used to support the weight of the boxes placed above without the risk of leaning on the locos. They are removable to facilitate gripping of the locos.

Notice (#3) summarizes the code and functions of the corresponding machine decoder.

The protection shims (#5), in one piece, were cut from 20 mm extruded polystyrene, width 41 mm. On one side, they are fixed with the double-sided adhesive, on the other, they are movable and frictionally hold on the dividers. Their use is to prevent the locos from moving into their place, while preserving the coupling.

As seen above, the capacity of these boxes can be increased somewhat by using 9 mm thick XPS. I haven’t had the opportunity yet, but here are the corresponding dimensions. That said, I have a doubt about the strength of a 9 mm thick divider in case of side impact.

Same thing, but for locos in the length of the box

Here, it is possible to choose to widen each place to 39 mm, or, as this drawing shows, keep the value of 37.5, which will prevent the locos from moving too much, by doubling a wall (or perhaps leaving an empty location for storing accessories such as spare parts bags).