The sides and lid dressing are glued with double-sided adhesive.

To glue the dividers, the double-sided adhesive proved inadequate on such a small surface: after a moment, it peels off. So, I tried a new solvent-free glue (important for polystyrene and for plastic models health): Pattex 100%. Without having much hindsight at the moment, the gluing seems satisfactory. But since the hardening is not instantaneous — count several hours, I had to provide a system to keep the dividers standing during drying: spacing shims having the exact width of the future cells.

These shims are made of a sandwich of different materials of well-defined thickness to obtain a regular spacing.

Naturally, if you are more gifted or better equipped than me to get well-levelled and parallel faces, you can make these shims one-piece blocks, for example wooden. 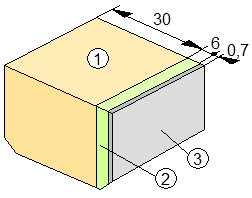 They are bevelled about 3 mm at the bottom to avoid being glued at the same time as the dividers if the glue overflows a little. Tip: mark the upper side of the shim.

To get fairly straight dividers, at least three rows of shims should be provided: one at each end and one at the centre.

I proceed as follows:

When the last series of shims is placed, blocking the assembly, I place a block of expanded foam over the dividers (to compensate for the divider height unevenness), then a hardboard sheet of dimensions somewhat smaller than the box interior, and finally a 5 to 10 kg weight (a can of ironing water, well closed!) to hold well the whole. I let it dry overnight.