Today (2015), extremely small (1.6 × 1.5 mm) bicolour SMD LEDs can be found, either naked, to which one will then have to solder wires, which is similar to microsurgery, or already wired, but of course much more expensive (more than 7 times!), and whose connections are particularly fragile, which brings us back to the previous case…

I wanted to try to fit this kind of LEDs to my BB 63888 Roco, whose lighting, even modified, was not really satisfactory.

A small AutoCAD 3D drawing allows to validate this project.

One can see that if the optical part of the LED fits into the opening, the rear part is a little narrow. But the wall of the lighthouse is very thick, and there will be way, by thinning it, to fit the LED with no trouble. 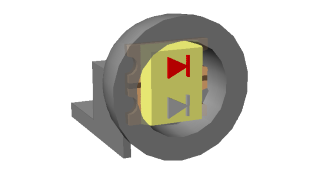 First, we must extract the optics. To do this, we have to lift the body (the snap-in lugs are at each end and, on the sides, just in front of the cab), not without having carefully removed the guardrails.

The light guides can then be removed beneath the ends of the bonnets, and the headlight optics can be recovered, from which the small light guides are also removed. The different light guides will no longer be used. 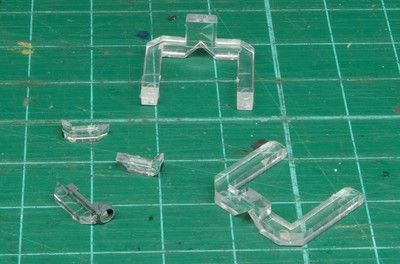 The milling purpose is to enlarge the future housing of the LED. It is better to place the optics in a small machining support that will allow milling right to the axis. A 2 mm thick polystyrene board receives two (or four) 2 mm wide by 0.5 mm deep milled grooves at least 6 mm long (the headlamp supports don’t have the same length on both sides of the machine). The optics will be maintained at right angles in the vice of the milling machine, the rear of the parabolas bearing on the edge of the support. They will be dug with a 2 mm spherical milling bit. 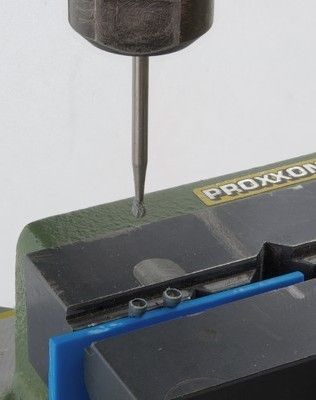 If you choose, as I did, the “naked LEDs” option, here comes the most nervousness generating operation, while it requires the most serenity possible… It is feasible, but the problem is to ensure the soldered joint quality, without short, and without breaking the wires at the worst moment (Murphy’s law requires).

I used 1/10 mm enamelled wire. It is very thin, admittedly, but more flexible and therefore less brittle than a larger diameter wire.

Here again, a support is very useful. In a scrap piece of FR4 PCB, I milled a 1 mm wide, 0.5 mm deep groove, length about 3 mm. This plate is placed in a vice. The LED will be held upside down in the groove by a first pair of tweezers (first photo), while the wire to be soldered will be held by a second pair (second photo). 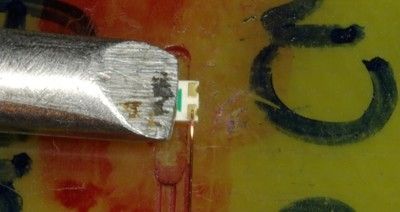 The wire, cut to a much greater length than necessary, should be stripped about 1 mm by scraping on two sides. Soldering will be greatly easier if you use a liquid flux. Be careful: the latter is corrosive and conductive: the assembly must be cleaned thoroughly by soaking with water, preferably hot, during… a certain time. 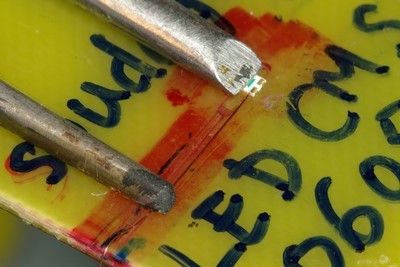 Once everything is in place, you just have to approach the soldering iron (special SMD) tip slightly tinned by sliding it on the surface of the epoxide until contact. Tip: just after each soldering, remove the tweezers that hold the wire, pull at it moderately and colour it with a felt pen, to mark it of course, but also to test the soldered joint strength.

Warning: if you use the same LEDs as me, the polarities indicated on the web page are false. The little green triangle, which looks like a diode symbol, is actually reversed. The positive common (anode) is the tip side of the triangle. Unless it is a marking error on the batch I received; it is better to do a polarity test before soldering these LEDs. Here is a small drawing illustrating the thing (rear view of the LED), besides showing the ideal wire implantation; in reality, we do what we can… 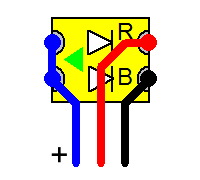