Among other modifications, the guardrail pins used to fix them on the cab have been suppressed, because the corresponding holes are misplaced, which made the guardrails raise a little.

Roco ref. 63435 BB 63888. An old-fashioned electrical circuit, with incandescent lamps that heat and deform the plastic, and no red lights. Let’s see what we can do.

Note: I began improving this locomotive in 2011. Since then, very small (1.6 × 1.5 mm) bicolour LEDs have been released, making it possible to think of putting them directly in the headlights. I made this improvement and described it in page 5. So, pages 2 and 3 become a bit obsolete, but I leave them for information.

First remove the guardrails, gently because they are relatively fragile and well stuck in their supports.

The body is then easily removed by pressing it between thumb and index in front of the cab, on the large bonnet side (there are snap-in lugs). There are two other snap-in, to the centre of the bonnet ends, but they do not oppose any great strength.

Careful with the headlights and their small light guides always trying to escape. Also beware of the fact that they don’t have the same length in front and back ends.

Preparation of the body

I don’t want the decoder to be visible into the cab, and I also wish to install lighting into it. So, I’ll have to make some changes. Let’s first unclip the cab off the bonnets by gently moving it apart on both sides, then remove its roof (the SMD lighting LED will be placed between this roof and the cab spacers). I also remove the too thick window panes (this thickness can be seen when looking at the machine from the front). I will keep the front windows, but replace the side ones with thin Plexiglas glued with Kristal Klear.

Inside the bonnets, the reliefs supposed to hold the incandescent lamps must be leveled, not without having carefully removed the light guides. If your machine often ran lights on, you may have the unpleasant surprise of seeing these light guides deformed by heat. As the body plastic material is white, either paint the leveled part in black, or, more efficiently, stick a piece of black electrician adhesive band.

The tiny SMD LED is soldered to very thin wires, which are connected to bronze strips through vertical 0.8 mm diam holes between the cab wall and the window panes behind a pillar. SMD LEDs already equipped with enamelled wires may also be found, a little too expensive to my opinion! 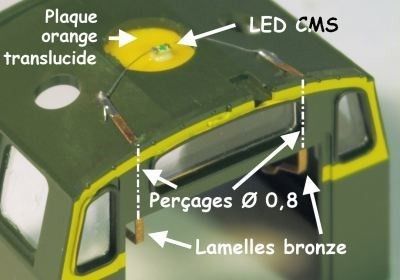 The LED is placed in the middle of the roof, into an existing opening, under which I glued an orange “filter” cut in a soft ring binder cover, and used to warm the too cold light emitted by the LED. That makes a kind of ceiling light. The drawing opposite shows the strip shape designed to contact the future new PCB. The whole is very thin and does not hamper putting the roof in place again. These strips are introduced from below, and the upper part is then folded over the roof. The wires are soldered last. To avoid damaging the plastic during soldering, temporarily insert a piece of household foil under the strips. 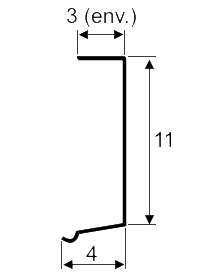