The original Trix pantographs are both coarse and false. There are two main flaws: the geometry of the lower frames and the folded position holding device. In this picture, we compare the MT type pantographs of two locos: the BB 12061 Trix and the CC 14014 Hornby-Jouef. Even if the pantos of the latter suffer from some flaws, they have a much more satisfactory geometry, see highlighted in red: their frame is trapezoidal, not rectangular as on the Trix loco. 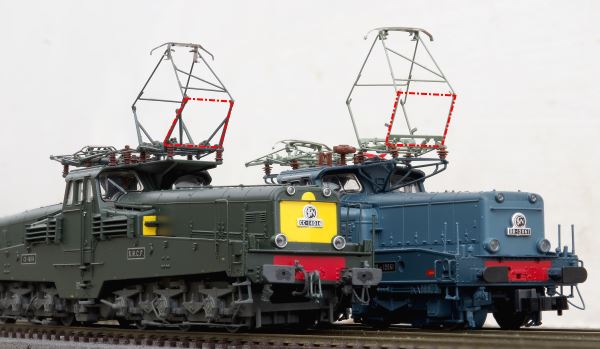 As a result of this error, the bows are visibly too wide. As for the holding system, it uses sorts of big cock studs grafted on the arms, which have nothing to do with reality.

Jouef pantos are no longer available. Fortunately, a well-known French craftsman, J.-P. Pennati, formerly leader of Carmina, offers MT pantos of very beautiful appearance, which have a priori only one fault, their price!

We will see that the mounting of the Pennati pantos is not complicated, but we will have to make some changes to get a satisfactory appearance.

Let’s start by removing the old pantos: just unfold the legs that pass through the insulators. To make the operation easier, one can disassemble the brackets that are nested in the cab and held by two small Phillips screws, furthermore little unobtrusive and for which we should also find a better solution. But then, we should consider remaking the brackets purely and simply…

At this point, one can choose to keep the original insulators, or use those provided by Pennati. Personally, although I know that two types of insulators have been mounted on the 12000, I preferred to keep the Trix, because, with the Pennati, the pantos stand too high. The length of these insulators is not in question; it is their compatibility with the brackets that is problematic. Return to the previous paragraph… 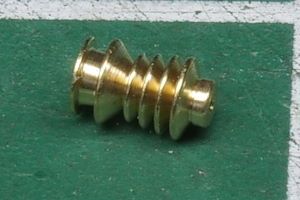 The distances between the Pennati panto legs exactly match the brackets’. So there is no difficulty here. It must still shorten the feet pins. I glue with Kristal Klear, which has the advantages of being (almost) transparent and allowing easy disassembly.

Once a panto mounted, we realize that there is a little problem of symmetry…

What is the cause? The extension stop (1), placed on one side only, combined with the clearance of the articulations, causes the panto skewing. The cure? Add an identical stop (2) on the other side. 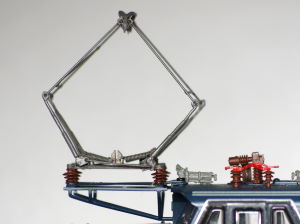 The Pennati panto is asymmetrical. 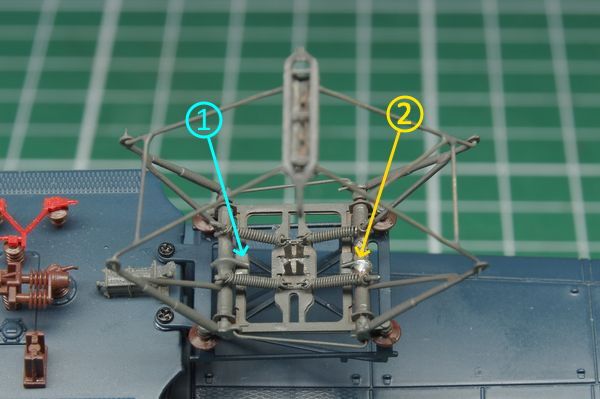 Warning: the following manipulation is relatively risky. I think the best is to carefully disassemble the panto to intervene only on the concerned part.

After checking, the rotation shaft is made of brass, so it can be soldered. I make the new stop (2) with a ø 0.4 nickel silver rod flattened about 1 mm and curved to fit the shaft’s shape. After scraping its painting, I soldered the new stop with tin-silver. It is thin enough to allow adjustment by deformation.

A picture with both modified pantos appears at top of page 1 of this article.

Finally, some pictures of the machine equipped. I should also remake the roof line… 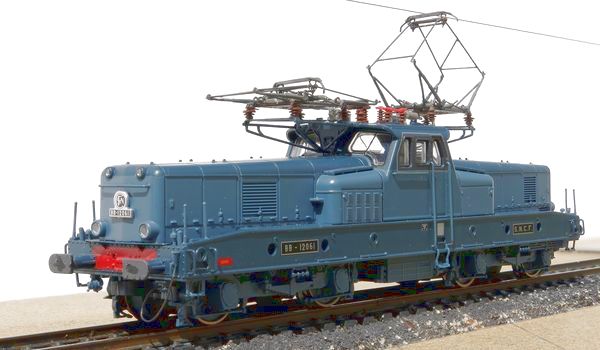 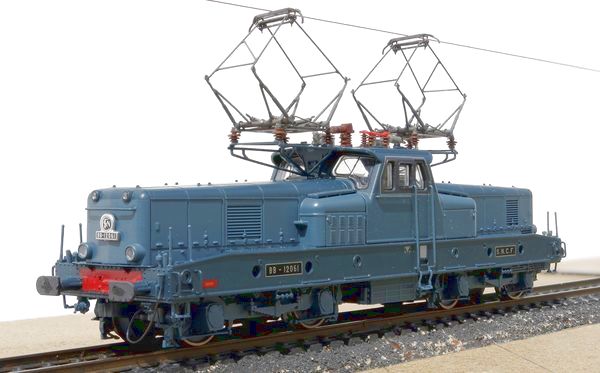 There is also a minor and not very visible improvement: the plastic heating jump­ers are replaced with 0.5 mm wrap wires.