Intervention on the PCB 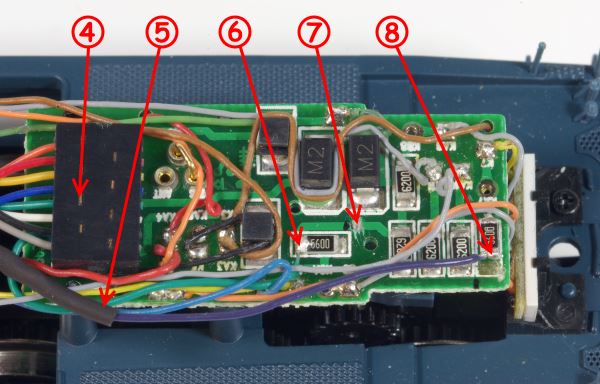 Cut the track marked 7 (see detail on the picture below), and solder a preferably green wire (to comply with the DCC standard) between the left end of the resistor marked 5600 (mark 6) and the side of the tulip pin no.3 of the eight pin NEM socket — from top to bottom, on the left, we first have an orange wire (pin 1), then underneath a yellow wire (pin 2), and finally pin 3 (marked 4). Be careful not to fill it!

Then, and this is the most delicate point, it will be necessary to unsolder the resistor marked 5600 and marked 8 in the photo, because the track is hidden under this resistor, and its neighbour is too close to be able to intervene without risk. Use a de-soldering braid to absorb as much tin as possible. If you accidentally remove the lower pad, it does not matter, since it is precisely this part that must be cut out.

You’ll solder a preferably violet wire on this resistor; it may be the decoder’s itself. But I preferred a separate wire soldered on the decoder’s wire, this connection being protected by a piece of heat-shrink sleeve (mark 5). This is thus possible to disconnect the decoder without directly intervening on the PCB. Attention, resistor side, this wire shouldn’t touch the older track! 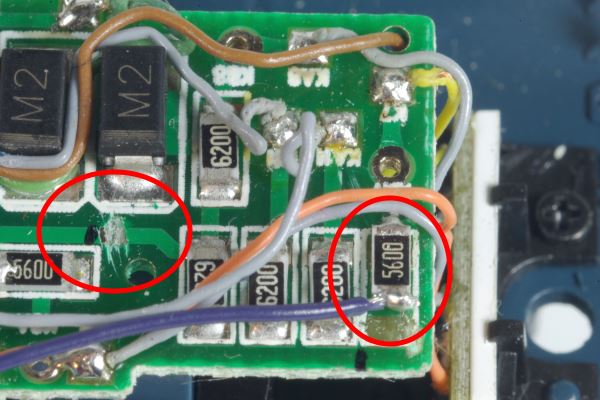 Voila. All you have to do now is test the operation, by assigning keys on the remote control to the red lights. If you use a Lenz Silver+ decoder, you may assign only one key, as this decoder allows the red lights reversing, depending on the direction. You will also have access to an extra output for installing cab lighting, for example.

You don’t know the meaning of SMD resistors marking? Here it is revealed: from the n digits, the first n-1 are significant digits, so take them as they are. For example, if the marking is 5600, take 560 as is. The last digit gives the number of zeros to be added to the first digits. Here, no zero is to be added, so it is a 560 Ω resistor. Another example: 473. There are only three digits. The first two give the value 47, to be followed by three zeros, thus 47.000, or 47 kΩ. See also this page.