The brass bearing system is only of interest with non-insulated wheels on an axle isolated by its middle. The trick I used on the Nord Rapide coaches, i.e. to interchange insulated wheels with non-insulated wheels taken from other vehicles, is valid only if I have enough axles (in fact, twice the number) to do this manipulation. This is not the case here. I have ANF tank wagons, whose wheels are the same diameter, but their browning is darker, and, above all, the waves of the wheel disc are different.

How to make conductive the insulated wheels? I see two possibilities:

Surprise: the REE axles are not like the others (besides, in REE, they don’t do much like the others, for better or for worse). First, their diameter is not between 1.99 and 2.01 mm as in most other brands, but rather 2.10 mm and, for sleeving, it’s not the same; then the wheel bearings have a 1.62 mm reduced diameter, a solution which seems unnecessarily costly to me. Finally, the bore of the insulated wheels is 2.5 mm.

So, I need brass tube with an outside diameter of 2.5 mm and an inside diameter of 1.6 mm. Well, I have it in stock, from micro-modele! Unfortunately, it is actually ø 2.45 mm and the wheel has backlash. No matter! After removing the brown coating of the hub, I prepare a 3 mm long ring, and I solder it into the wheel. Finally, the bending is acceptable and not worse than on some original axles.

Note: in another test, I cross-cut the ring. Thus, the tightening is better distributed between the axle and the hub. In two cases out of four, the wedging proved sufficient. In the other two cases, I began by winding a layer of 35 µm copper tape (see below) onto the axle, then the split ring. The tightening then became almost sufficient, and the bending almost non-existent.

Last step: cut the axles in two, shorten them a little and sleeve them together. I usually use ø 3.2 mm Evergreen tube, but here, because of the axle larger diameter, the tightening is too strong and the plastic deforms. DIY solution: the cartridge of a Bic ball pen, which has just the right inside diameter, and an outside diameter a little smaller than the Evergreen, which is not bad. 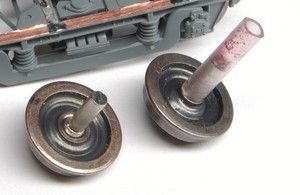 Once the wheels are offset by about 0.2 mm with The Puller, the axis length set at 23.75 mm (instead of 24.15 at the origin), and the back-to-back spacing of the wheels checked to be 14.4 mm, the axles are mounted back on the bogies. Not ballasted, not mounted under the coach, they go down a slope of less than 1%. So, speaking of friction, it’s alright!

Concerning the trial with conductive paint, after painting several layers, I have got various but rather low resistances, between 2 and 15 Ω, which is negligible compared to resistances in series with LEDs, which are around 1 kΩ. The problem is that it is necessary to think of operating the wheel offset on the axle before painting, because, as soon as there is slippage, the conductive layer is broken, and we must start again painting…

There are holes probably allowed for passing wires: they are located next to the holes of the roof fixing screws and open into the toilet. There will be no difficulty in connecting the LED strip to bogies.

Regarding the latter, it is first necessary to electrically connect the brass bearings which have just been assembled. For that, I tried three solutions.

The first, classic, is to connect them with very thin wires, glued along the bogie chassis. They get closer to the centre of the bogie, and are soldered to the insulated wires that will enter the coach body. The disadvantage of this method is that it is unattractive, although practically nothing is visible when the coach is on track. The bogies are so well reproduced that I find it is a pity to disfigure them as little as it could be.

The second, which is less conventional, is to use the conductive paint previously used for the wheels. This silver paint is not particularly discreet, but can be made invisible by weathering it. The disadvantage is that, at least for the product I tried because I had it on hand, it needs several layers to obtain a sufficiently low resistance, and still rather unpredictable, but in any case less than 10 Ω, which is acceptable.

Last minute: during a test on circuit, I unintentionally caused a derailment and a short-circuit. The DCC command station released, but it smelt warm: the conductive paint heated — well, its main purpose is for defrosting a coach rear window! — and slightly deformed a bogie beam. So, solution to forget!

I wanted to try self-adhesive copper tape to make the conductive bearings. The expected advantage is that there is no need to shift the wheels, given the extreme thinness of this strip (35 µm, like on printed circuit boards). But this thinness could also be a disadvantage if it wears too quickly. Future will tell. The purchased tape is 5 mm wide, which is perfect for the bearings. For the connections, it must be cut into thin strips about 1 mm wide.

The bearings are cut like the previous ones, put into place (it is the least easy step), well applied on the guard plate. Then the outline of the bearing hole becomes visible, where the strip is simply pierced by positioning a pin axle. The 1 mm strips are arranged on the side beams of the chassis. These strips must then be tinned to connect them electrically. Flux mandatory, because soldering must be done very quickly under penalty of melting the plastic. However, the electrical resistance obtained is much lower than with the conductive paint, in the range of 0.1 Ω. 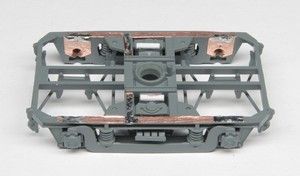 Click the image to see the bearing more closely.

Last minute: the connections with copper tape are OK, but NOT the bearings made with the same material! The electrical contact with the axles is very insufficient!

Connection to the lighting circuit

In every case, the flexible insulated wires are glued (cyanoacrylate) to the bogie beams and then enter the body through the holes under the toilet, to be connected to the bistable reed control circuit. The latter is placed vertically against the wall of the toilet, as it is impossible to put it under the roof as I usually do. I have of course checked that the control by magnet is done properly.

On that occasion, I had to review the printed circuit to make it smaller, which is not a problem in itself, but makes soldering the SMD more difficult.