As expected, REE offers very attractive, detailed models, for a relatively moderate price. As for the details, let’s mention the towing hooks under the steps, the skirt panels handles, the brake bleed pulls, and, inside, the luggage racks ans the mirrors in the compartments.

On the other hand, they have defects that I think are difficult to forgive.

The small windows between platforms and compartments are offset towards the latter. This error was spotted by Renato on the Loco-Revue Forum. Here is an illustration of the facts: 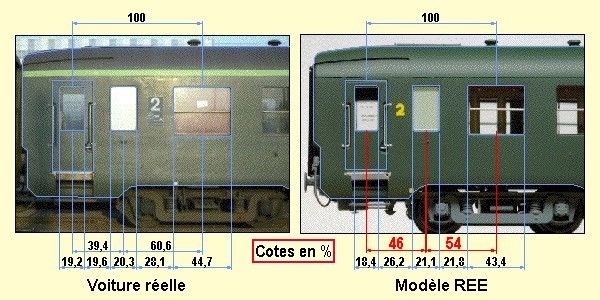 Note: do not deduct anything on the dimensions in height, the vertical view angle not being exactly the same on both photos.

This kind of error is not permissible on a modern model. This is not a detail, but a very visible feature of the coach. It is very difficult to modify by the amateur (cutting, gluing, filling, painting). If one accepts this, one can accept anything and one is reduced to the notion of toy, and no longer of model.

I recall that some models have been shot for less than that (for example, the Roco 72000 first release).

Junction between body and roof

Let’s also talk about the lack of quality of the junction between body and roof. Not only is it wavy, but there are a lot of plastic burrs that do not help… 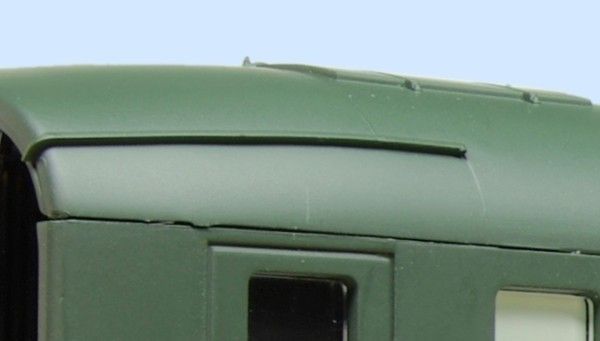 But why did not REE, like their competitors, provide ribs along the body as well as reinforcing cross-members? Well, because they moulded the body and the chassis together, and it would have been impossible to mould such a piece with reinforcements! Would not it have been smarter then to make a separate chassis and a single piece for the body and the roof? There would have been no junction problem in this case! I understand that the goal was to have the thinnest wall possible, to get the thinnest possible window panes, therefore more realistic! There was a simple solution: make between body and roof an assembly by groove (roof) and tongue (body) along the whole length, and a little deeper than what was done.

So, too harsh a judgment? Maybe, but as my teacher of 6th grade French said, tapping our fingers with a (flat) ruler: “qui bene amat bene castigat”.