Mounting of the coupling

Preparation of a male header

We can directly buy 4-contact headers, but we can also choose longer ones and cut them at will. However, the cost price will not necessarily be more attractive. Attention: these headers seem breakable, but the break is a bit random; it’s better to saw them.

For the problem of pins bent at 90°, we can consider two solutions:

The second solution is much preferable (in manual assembly!), for a price hardly higher. In addition, the useful length of the pins is greater: 3.7 instead of 2.6, as shown in this extract from the manufacturer’s documentation.

Soldering does not present any particular difficulty. We just have to make sure that it is properly aligned with the support.

Once the two parts are connected, two tests must be done, both with a continuity tester:

The difficulty here is to replace “prototype” couplings already installed with the new ones, without dismantling everything. Here, only three of the four wires are needed.

I note that the soldering pads on the tails are a little small, but we get there anyway. We must start with the wire or wires which will be on the inaccessible side once the connector is mounted in the NEM box, here the yellow wire.

The soldering spots must be as thin as possible. If they are too thick, a brute solution will be to flatten them with flat pliers. 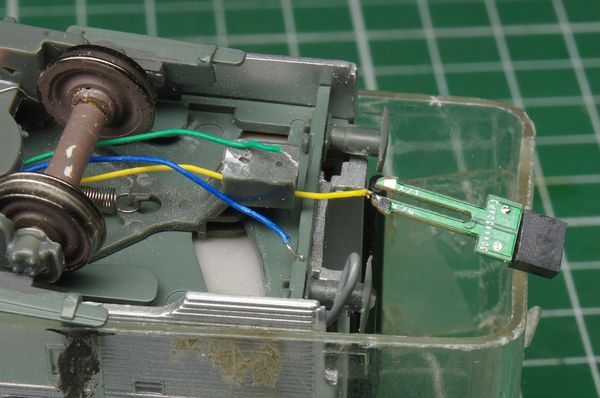 For the other wires, it is possible to solder them like the first, or when the connector is in place. Be careful not to touch the NEM box in this case! 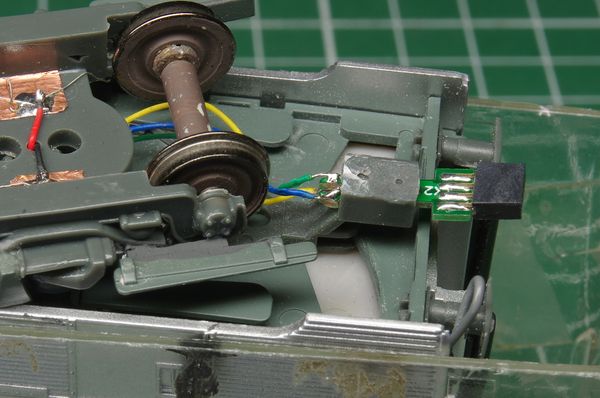 Coupling between two coaches standing on their wheels is possible by aiming well, but without being able to fully snap-on the tails: it will be necessary to use tweezers for this.

Regarding separation (uncoupling): the good side did not come out first. This is due to improper milling of the swallow tails. Simple remedy: a wedge in Evergreen, section 1 × 2 mm, bevelled and inserted between the two halves of the tail. 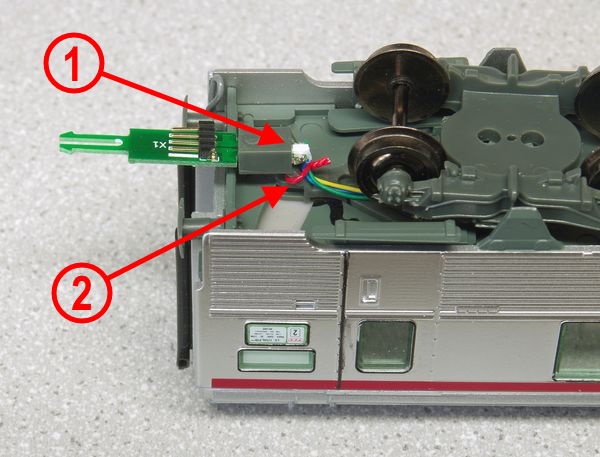 The wedge is in (1). A tie (2) prevents the wires from moving at the soldering location and thus prevents their breakage.

Taking these remarks into account, I have modified the manufacturing files in case a new series has to be restarted.

Finally, despite the small imperfections, I validated the object and undertook the manufacture of around twenty couplings (out of the fifty ordered). 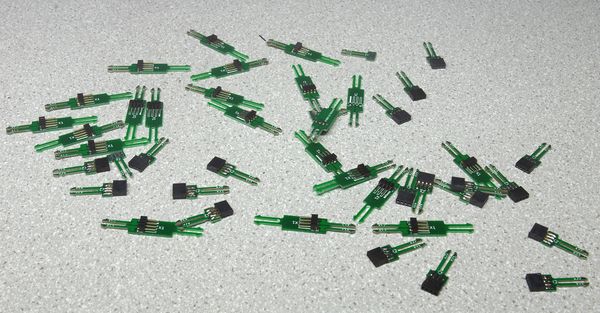 I forgot one detail: the price. Taking into account transport and customs costs (because the shipment from China has been taxed), the total price of parts, PCBs and connectors, is €1.25 to equip a coach. Who says better ?