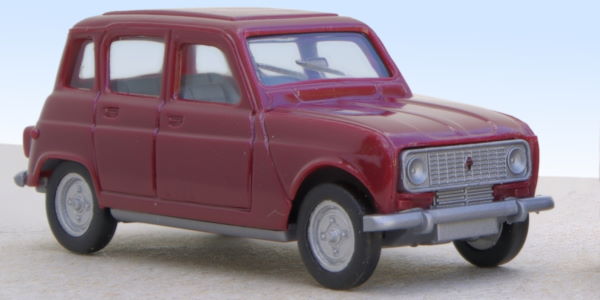 Bought in 3 × two copies for a possible future loading. Unpainted model, no accessories inserted. The windows are better represented than on the older model, but the top of the front window is always lower than the rear one. The windscreen is poorly rendered, particularly the top which is straight and whose angles are not sufficiently rounded.

The Renault logo on the grille is chrome!

The steering wheel is moulded with the seats. It lacks sill protection. In short, it is Herpa close to Magic for twice the price.

On the white model, the fact that the tail lights are not painted is very visible! Similarly, the tenon serving as a licence plate, which is grey as the chassis!

The blue model is more (and much too!) expensive, because no improvement has been made. The blue is pale, fortunately much clearer than in the catalogue.

The R4 was produced from 1961 to 1992. The model with grey plastic grille dates 1978, the GTL can be recognized by the small grid under the grille, at the former location of the licence plate.