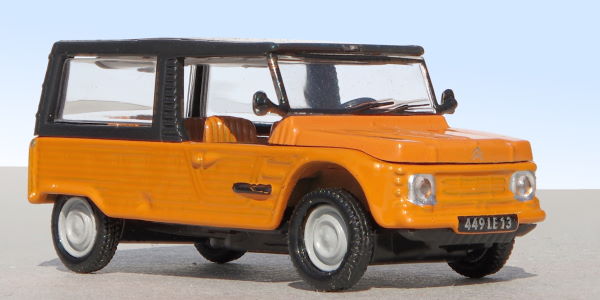 This model curiously picks up the reference of the previous one, whereas it is not the same model. The latter is manufactured by Universal Hobbies, was part of the Atlas collection, and is made of metal, not plastic.

This is the same real model as the previous one (after restyling of 1978). Pity. However, although it is less finely engraved (metal requires), it is more accurate in its proportions (size of the wheels, height of hood, even too low now). The hood is not removable.

The build quality is Norev, i.e. approximate in the adjustments, the rims and the application of the touches of colour.

The Mehari was produced from 1968 to 1987, in Bezons (near Paris) the first year, then abroad (Belgium, Spain, Portugal).

The vintages before 1978 are recognizable by the fact that the Citroën symbol (the double chevron) is on the horizontal part of the bonnet, while later, it is on the front vertical part. The front indicators, which were round and on the side of the headlights, become rectangular and pass underneath. The grille becomes lower.