For obvious reasons, I wanted to avoid cutting the connection cable between the command station and the remote control. I will therefore use a female DIN socket and a male DIN plug to connect these devices to the radio modules.

Diagram on the remote control side

Diagram on the command station side

Here, the radio module power supply is taken from that of the XpressNet bus (12 V) thanks to a voltage regulator LM7805, largely oversized, but convenient for wiring “in the air”, as will be seen below. 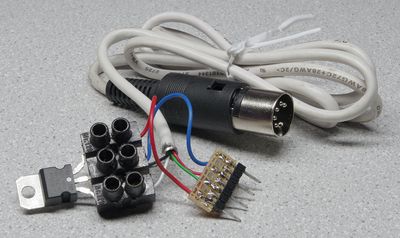 Here is a view of the connections to be made on the central side. It can be seen that the voltage regulator is simply connected to a three-terminal block. On the radio module side, I made a connector with a 2.54 mm pitch pin strip: it is first soldered to a piece of prototyping board, then one pin out of two is cut off, because the module’s terminal block pitch is 5 mm. This allows a much faster and safer connection / disconnection — less risk of connection error — than with flying wires, should the module be reprogrammed as described on the previous page. And this case took place a few times (to stay modest)…

The cable with a DIN plug (badly closed I notice) is taken from a USB cord that we begin to be provided in abundance. This is almost ideal, since it has the same wire colours as the XpressNet bus, except white instead of yellow.

Besides, on the USB / RS485 adapter side, I have provided the same connector. And remote control side as well.

Module connected to the USB / RS485 adapter for configuration purpose.

Let’s say it right now: it does not work!

The problem is that these scenarios are not mentioned in the — indigent — module documentation. The only relatively close indications are: red flashing LED = emission; off if transmission is complete. Green LED send one flash if receiving.

In addition to different transmission speeds, both for UART and for radio transmission, I also tried to reduce the transmission power from 20 to 14 dB for example. All these tests failed miserably.

Voilà. I got there, sadly. If communications specialists could look into the case… Note that I have suspicions. Indeed, I looked at the characteristics of the industrial modules of which I spoke at the beginning: none is able to transmit to 62,500 bps. This usually peaks at around 50,000 bps. So, would the characteristics of my modules be untruthful? Or is the emission frequency limited to 115,200 bps responsible, when in theory it should be at least 125,000? Or is it because the Lenz protocol is 9 bits instead of 8 usually?