The current pickup is done on the inside of the wheels. The strips are very flexible. Attention in case of disassembly: you have to check the position of these strips with respect to the wheels. Chance of short circuit!

The cab is lighted by default.

Assembly and test of the decoder

Before installing the decoder, it is necessary to remove the analogue plug, and it is rather delicate. The connector has a large retention force, and the entire circuit board tends to come with the plug. Very thin LED wires could be broken.

I chose (if we can say, because the type of decoder is practically imposed) the Zimo MX630P16 decoder, Plux16 interface, no sound. Testing and programming will be done on a test track with the ESU LokProgrammer. The original operation before any intervention on the decoder is as follows:

It is impossible to switch off the cab lighting (tried with F3 to F19!)

In white lighting, I see as another person on the Loco-Revue forum that the headlights are more or less weak depending on the angle of vision. Explanation: the two-colour LEDs are slightly offset, arranged horizontally, and set back from the surface of the optics. As the light-emitting junctions are not in the axis, and especially the white ones, the white junction is half masked by the strapping of the headlight in oblique view. Personally, on the BB 63500 Roco I equipped, I arranged the LEDs vertically, just to prevent the headlights from “squinting”.

For lighting, I wish if possible to control the red lights with the only F1 key, with reversal depending on the direction of travel, and the cabin by F2. This in order to keep substantially the same controls as on most of my models.

I also wish to be able to switch off all the lights on the coupled side, regardless of the direction of travel. I find this function very useful. It avoids, in case of change of direction, the following gymnastics:

When this function is activated, these three operations are done in only one: reverse the travel direction.

With some testing, I found that the cab lighting is wired on the FO5 output in Zimo terminology (it would be AUX3 at ESU).

Now the cab lighting doesn’t work anymore! This is normal: you have to assign a function key. I want to control it by F2, whose CV is CV36: 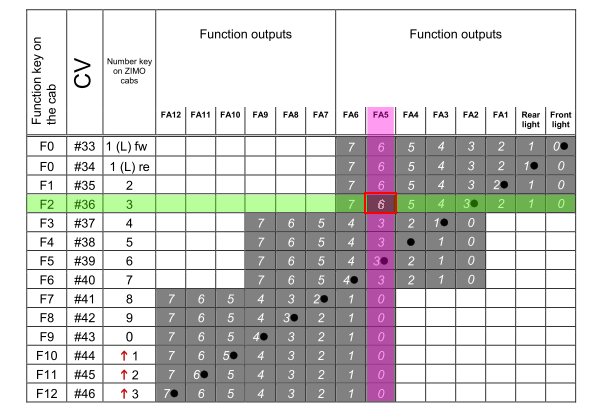 Note that the outputs are sometimes called FAn, sometimes FOn… Probably a hesitation between the ‘A’ of German Ausgang and the ‘O’ of English Output!

Turn on all red lights with the same key

Currently, the front red lights (FO1 output) are lit by F1 and the rear ones (FO2 output) by F2. I want to free F2 for cab lighting (see above).

I therefore assign both outputs to the same F1 key whose CV is CV35.

Now all the red lights come on at the same time!

The F1 key is now directional.

Turn off all lights on the same side

As already mentioned, I want to turn off all the front lights by F3 or all the rear lights by F4. CV107 and CV108 are responsible for this function.

The F3 and F4 keys must first be reset, since they must not control any output:

Note: using CV107 and CV108 (so by setting a value other than 0), we systematically switch off the white lights on the side concerned. The setting is to specify what other outputs should be switched off in addition.

To turn off the front lights, the CV concerned is CV107.

To turn off the rear lights, the CV concerned is CV108. Same principle, therefore:

Dimming certain lights without influencing others

The dimming is done by CV60, which affects all the outputs. It is possible to specify the outputs not to be dimmed in CV114. For example, to avoid dimming the cab lighting wired on the FO5 output, write:

Just add the values ​​of all the outputs to be excluded from the dimming.

For example, for the “early morning” photo below, I had to use a long exposure, and as a result the white lights were “burnt”. I applied a high attenuation (10 for a maximum of 255). But then the cab was not lighted enough to see the characters. So I excluded the latter from dimming as explained above.