A voltage multiplier for coach lighting (1)

A voltage multiplier: what for?

I recently rediscovered voltage multipliers: doubler, tripler, quadrupler… These are circuits which, as their name indicates, are capable of supplying a higher voltage at the output than at the input, provided that the latter is supplied with alternating current.

You will tell me that the transformer is here for this. Of course, but this component is always rather cumbersome, too cumbersome in our applications, even at relatively high frequency.

But you will see that with very small components, diodes and capacitors, we can achieve the same result.

Let’s consider the case of a coach requiring 12 LEDs. The numerical values chosen will be as follows:

We will consider three cases:

First case: 12 LEDs all in parallel

Each LED has its own limiting resistor (it is not advisable to use a single resistor for a group of LEDs in parallel). This is the classic arrangement. 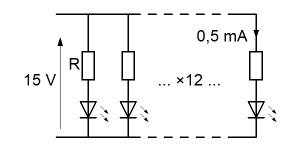 This is the solution I used most often. The total current consumption is only 4 times that of an LED, i.e. 2 mA.

Attention: the current is lower, but the voltage limit below which the capacitor cannot discharge is higher: 7.5 V instead of 2.5 V. Won’t this compensate for that? This needs to be checked. 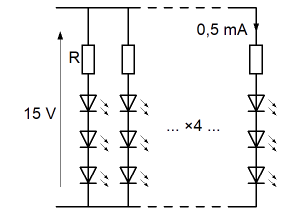 Furthermore, this solution is not always practical, because the number of LEDs is not necessarily a multiple of three. If, for example, a branch has only two LEDs, we must:

The problem of balancing the branches does not arise, since there is only one branch!

The current consumed by the assembly is that of one LED, here 0.5 mA. The (single) resistor is: 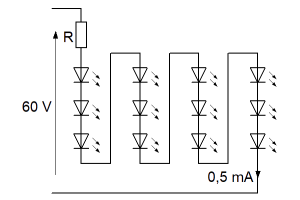 Before going on, I would like to answer an objection that is often made: in this circuit, if one LED is defective, the whole circuit will not work. This is true, but I answer this:

Calculating the capacitance for a given discharge time

Knowing this capacitance is important to see in which case the anti-flicker capacitors will be the smallest for the same efficiency.

Let’s consider the following circuit. It is assumed that the capacitor is charged to VCC voltage. At time t = 0, the switch S is closed.

Theoretical calculation of the voltage V as a function of time is of little interest here. Let’s just say that the discharge of a capacitor into a resistor follows a so-called exponential decay curve, which I’ll boldly replace with a straight line (in red) that is nothing more than its tangent at the origin. This straight line intersects the voltage limit line VLED at a point which corresponds, on the time axis, to the time constant which is equal to the R × C product. 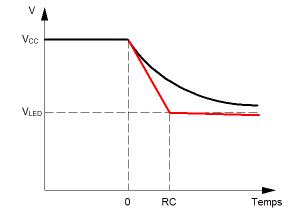 We can see that by replacing the real curve by the tangent, I am very pessimistic: in reality, the voltage drops much less quickly. But this greatly simplifies the calculation. When the voltage at the capacitor terminals reaches that of the LEDs, they have long since been switched off. However, a very small current goes on flowing through them, so that the capacitor continues to discharge very slowly, as shown by the line with a very small slope.

I made an Excel spreadsheet to calculate the capacitance to be expected, as well as other interesting quantities, such as P, power consumed by the whole circuit, according to the parameters indicated above. Here are the results.

We can see that, by putting LEDs in series:

The last solution is a winner on all counts: simplicity of the diagram, capacitor capacitance and power consumption! Of course, this must be tempered a little, as the quadrupler will require some additional components.