A power tank for the REE shunter

In analogue at 12 V, the maximum slip consumption is 46 mA in one direction, 40 mA in the other.

The idle is not very good: the speed is very slow, but not regular, probably for lack of inertia.

The CV5 was set at 93 to get around 50 km/h, which is more than twice the actual speed. But 22 km/h to scale is really slow! And if I really want to travel at real speed, I need only ask for the manoeuvre mode for which the speed is divided by 2.

As already said, the idle is not very good. I set CV2 = 5 for the minimum starting voltage (instead of 1 usually), but the operation remains jerky. However, let’s put this into perspective: I speak of a speed of about 5 km/h to scale!

With regard to lights, I consider that for a shunter prohibited from the main line because of a too low speed, an automatic reversal of the lights is not realistic. However, I kept it on F0, but I programmed on F1 simultaneous lighting of the four lights. For this, just set CV33 = 3.

The dimming was lowered to 8 / 255 (CV60 = 8) to obtain a weak enough luminosity of the lights, which are nevertheless too white.

The machine being very light, it would be interesting to adapt an imitation of a “power pack”: a simple capacitor with its resistor and diode charge-discharge circuit.

Where to place this circuit?

Where to pass the wires?

The wires connecting the tank circuit to the decoder must therefore start from the smaller bonnet to reach the bigger one. The cab is open, so, no question of passing the wires into it: they would be too visible. Fortunately, there is a possible path under the chassis: the one that is already borrowing the LED wires, passing along the motor. 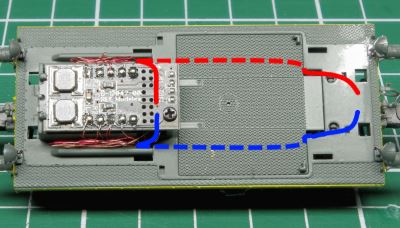 How to connect the wires to the decoder connector?

In this photo, the circuit board has been returned to make the connector visible. 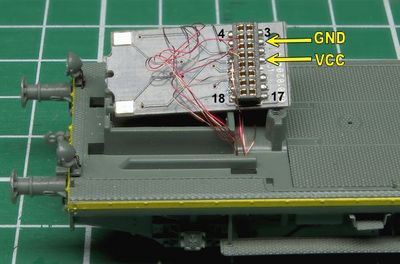 Note: using such a circuit is supported by the decoder’s manufacturer, although the diagrams offered are either simpler (simplistic?) or more complicated (and more cumbersome). See Zimo decoder instruction manual, page 58.

According to Deimos_epIV of the Loco-Revue forum, here is the connection diagram of the printed circuit board.

If this diagram is proven (I don’t want to dismantle my shunter again to check, but I don’t have any particular reason to doubt…), here is a probably easier way to connect the energy tank, without having to turn the circuit over, so with less risk of breaking wires.

To check, test the continuity between each of the arrow-marked pads and the corresponding circled hole of the connector, by inserting for example a sewing needle into it, indeed without forcing. 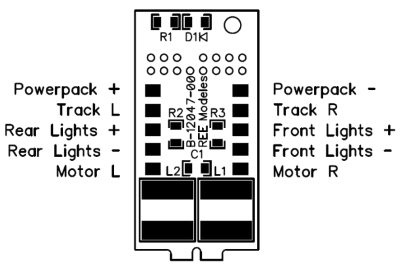 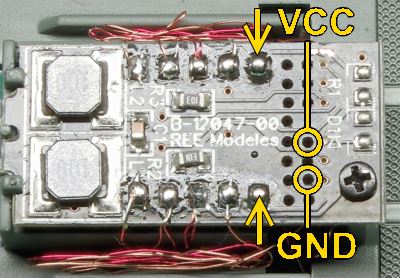 The diagram is classic (see here for example). The making is very simple. I did not want to create a specific circuit board to hold the 100 Ω resistor and the diode. It is the adaptation of an existing circuit.

The capacitor is a 470 μF. I had to remove its sheath to set it into the bonnet without forcing too much! Here it is put in place.

Note that it is possible to use non-SMD resistor and diode, arranging them along the capacitor. Then, the insulation of wires in relation to the chassis should be checked carefully. 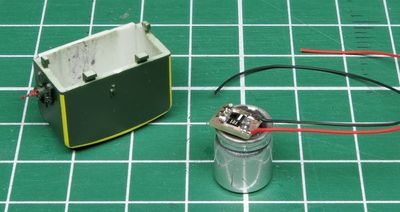 Click the image to get a closer view of the circuit. 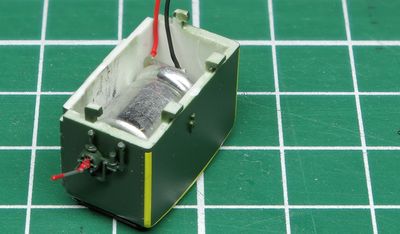 After the wires are passed under the chassis and up to the large bonnet side, through the existing openings, they are soldered to the printed circuit returned and held by a spring clip. Caution: the varnished wires are fragile, and one of them — only one good luck — broke.

Attention: the wires are to be soldered perpendicularly to the board, otherwise they prevent its fixing on the tapped holder. Here, only the black wire is correctly set. I need to correct the red wire position. This is best seen on the enlargement.

It’s important to test the insulation between the relevant connector pins because they are very close together, so a solder bridge is likely to occur. 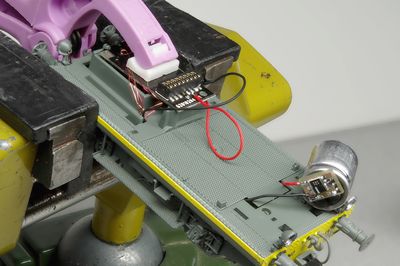 Click the image to get a closer view of the connector.

It is prudent to do some testing before reassembling everything.

To validate the operation of the power tank, I placed two pieces of adhesive tape, width 3 mm, 32.5 mm apart (the shunter’s wheelbase), across a line of rails. I run the locomotive at decreasing speeds, in both directions of travel, first light and then towing three 2-axle wagons (including the tachometer wagon).

Note: with more than three wagons, the shunter slips. I don’t know what was the real shunter traction limit, but it should not exceed this value too much. Some were however used to manoeuvre cold steam locomotives, which is something!

With the light shunter, the power break is crossed at the equivalent speed of 5 km/h; towing, at 7 km/h. The effective hold time is about 180 ms, a little better than in theory, probably because the current consumed is lower.

I also note an improvement in the regularity of low-speed operation, because the inevitable small power breaks are erased by the energy reserve.

We are far from a real Power Pack, but for a minimal cost and a good dose of patience, the operation is (a little) improved.