As with the diagram, it is very simple. Just click on the ladybug. Here too, small arrows indicate the error location. Unless you are absolutely sure of what has been done, it is best not to leave any error uncorrected before moving on. And, sometimes, it is absolutely not obvious. Sometimes it is enough to erase and then replace a trace to obtain a “zero defect”!

Sometimes, with our hesitation, the traces inherit many small more or less superimposed segments. It may not matter, but I don't like it. I like it to be clean. There is a tool in the Edit menu, Clean traces and vias…, but I haven’t noticed any effect from this tool. Another way to detect these specks is to place the traces in outline only mode. 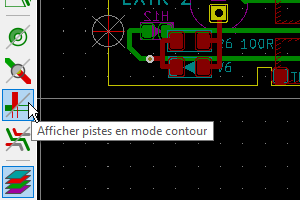 Here is the result:

We can thus see the places where trace segments are unnecessarily superimposed. That’s not the case here…

This mode can also be obtained for pads and vias. 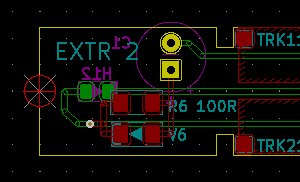 What to do in case of modification of the scheme?

This can happen, if only because we realize that it could be practical for the resistor in series with the LEDs to be moved.

In this case, after modifying and saving the diagram, you must redo the netlist, then import it again into the circuit. We can use two tools, I admit I didn’t see any difference, either Read the Netlist, already seen, or Update from the diagram.

Naturally, ratsnest elements (white lines) reappear, since devices have to be moved. Note that in the case of this strip where almost all the devices are aligned, it is not easy to visualize the links. It is sometimes advantageous to rotate a device to better see its connections. 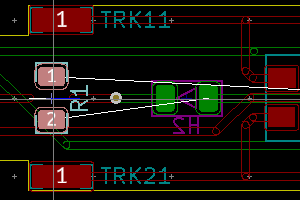 Once the DRC gives us the green light, we must produce the Gerber and Excellon manufacturing files. It is not too difficult. You just have to know which ones are really useful. Your provider will tell you, as well as their preferred filenames. Normally, the default names given by Kicad are accepted without problem. 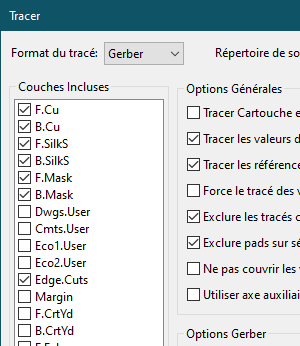 Basically, you just have to check that the useful layers are ticked, then click Plot. Normally, the other default options are left as is.

For drilling, just click at the bottom of the same dialog:

Another box opens. Here either, we don’t modify anything, we just check that the selected format is Excellon, then click Create drilling file.

In addition to the DRC, there are at least two checking tools. But first we had to produce the Gerber and Excellon manufacturing files.

The first of these tools is GerbView. To launch it, you must return to the project manager.

This tool lets you see the circuit in the way it will look when it is made with Gerber files. We can thus detect errors that would have occurred during the creation of these files. 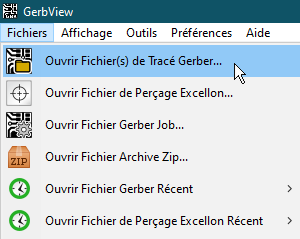 A file selector appears, which designates the files to be viewed. You can also include the drilling files (the holes are represented by a disk at the diameter of the hole). This is the option just below Open Excellon drilling file…

The checking is carried out by successively showing or hiding layers to better visualize them.

The second tool is rather intended for the 3D presentation of the circuit, but it allows to see some errors well. For example, I happened to note that the connection pads were not all on the same side of the board, when they should all be on top.

This is the 3D viewer, which is launched through the PcbNew View menu. 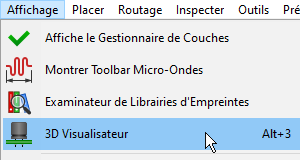 The downside of this tool is that not all devices have a 3D model. The creation of such a model is beyond the scope of this article. For example, I had to create a model for my reed switch as well as for the SMD rectifier, unknown at KiCad. Obviously, if a model is missing, the tool’s usefulness is somewhat diminished.

We can rotate the view in any direction, and export images to PNG or JPEG. Here is an example in PNG. 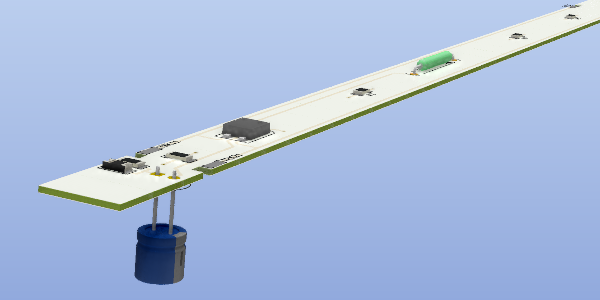 Note that I have also changed the appearance of the capacitor, which is normally flush with the board, to show that its legs can be deformed if necessary to facilitate its insertion into the toilet of the coach.

I struggled a lot at the beginning, not because of the complexity of the tools, but especially because the movement management with the mouse (in particular zooming with the wheel), is very different from that of which I am used with. So there are reflexes to learn again, but we get used to it quite easily.

The drawing of the traces is not without reproach, we quickly involuntarily create unnecessary segments which can disrupt the routing.

There are some small inconsistencies. In addition, although this software is of French origin, its interface is clearly translated, and quite poorly, from English. From one tool to another, the same functions sometimes have different names. However, it must be remembered that it is a free tool, and of appreciable power. I only touched on the possibilities.

Last remark: the documentation is also poorly translated into French: here and there some paragraphs remain in English. If you read English, you should consult the help directly in this language, as well as for online search. We will have many more answers, as is often the case on computer related topics.