Let’s start by clicking the appropriate button, either in the project manager…

The working screen appears. First observation: the frame of the “sheet”, in very dark red, is almost invisible. I find this quite annoying, if only to read the title block of the drawing. We can improve things a little by asking Show page limits in the Preferences menu, which gives a white frame, but which does nothing for readability. 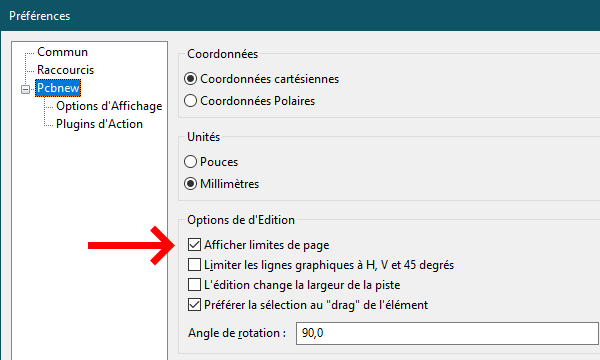 Curiously, we can modify the colours in Eeschema, but not in PcbNew…

While we are in Preferences, I recommend that you change the cursor so that it spans the entire screen, which makes it much easier to align the devices relative to each other. 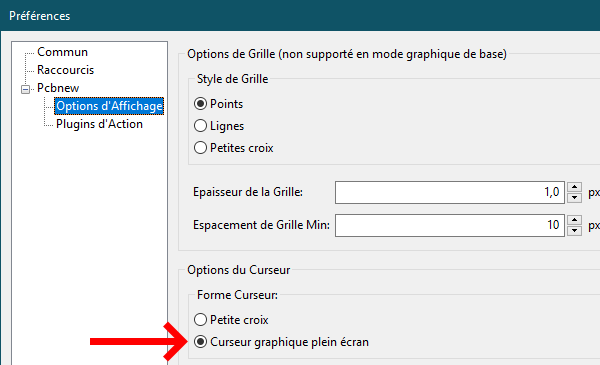 First of all, let’s fix the origin of the work grid, which will correspond to the origin of the AutoCAD drawing. The button is located in the right-hand bar, where, as in Eeschema, the placement controls are located. 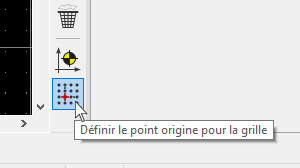 Let’s place it towards the middle vertically, and to the left of the sheet. 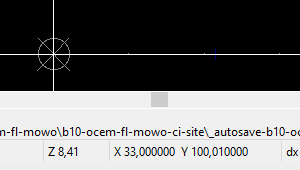 Before importing the DXF drawing, let’s select the layer that will receive it. It will be an xxx.User layer, reserved for this use. Let’s choose a layer of a well contrasted colour, yellow for example. Note that you can change this colour with a right click. Leave this and click the desired box. 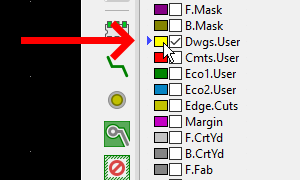 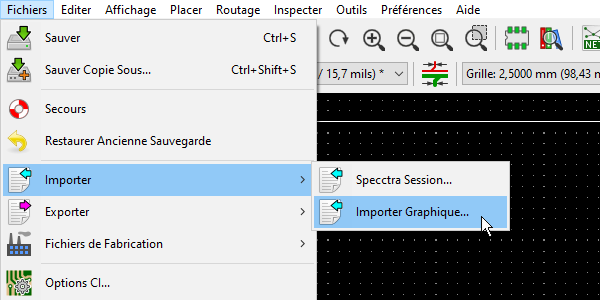 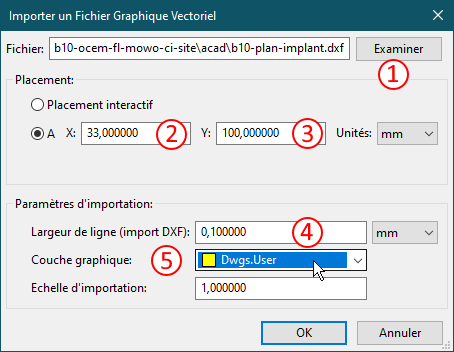 Several things are to be defined here:

Let’s validate. The drawing appears at the expected point. 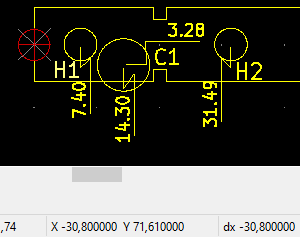 Drawing of the outline

You would think that it is already here, since it is part of the previously imported diagram. I thought at the beginning that it would be easy to select this outline in the User layer, then change layer using the properties. Unfortunately, it doesn’t work: you would have to select each line in turn to do so. When it’s a simple rectangle, that’s fine. But if the outline is more complex, it quickly becomes very painful.

I found it faster to take the AutoCAD diagram, erase everything except the outline, export it to DXF under another filename, and import it again, but this time of course on the Edge.Cuts layer.

It’s still a shame that we cannot edit a set of objects together, however of the same kind (lines or texts). However, you can select several objects, either by framing them with the mouse, or one by one, by clicking them with the Shift key pressed. For texts, you cannot change their size for example in a global way…

Note about selection with the mouse. It is done in the same way as with AutoCAD: if you drag the selection rectangle from left to right, only the objects fully included in this rectangle will be taken. If you drag from right to left, even objects crossing the rectangle will be included. It can be useful for selecting a single object, a line for example, which cannot be captured with a single click…

It’s good to be inspired by AutoCAD, a little more would be better: In my opinion, it lacks an orthogonal mode and an object snap mode, even simplified. Admittedly, the outline drawing hooks a line to the previous one, but it is often random and it doesn’t work on all the layers.

The netlist will allow us to import the devices. 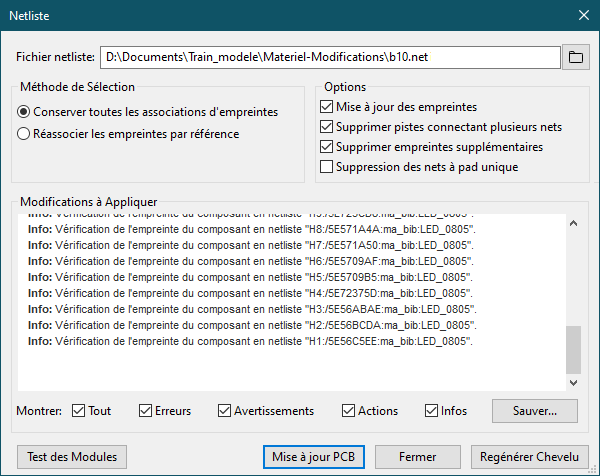 After validation by Update PCB:

A bunch of devices appears, which we place haphazardly, near the layout drawing. 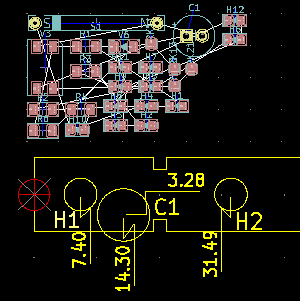 At the moment, they are highlighted, which means they are selected to be moved or rotated, etc.

Let’s click (or Esc) to fix them. We will now have to position them one by one. Patience!

To make things a little easier, especially at the beginning, we can do Edit / Search, and type the device reference, which will select it. Here, I asked for TRK11, which is the reference for a connection pad. 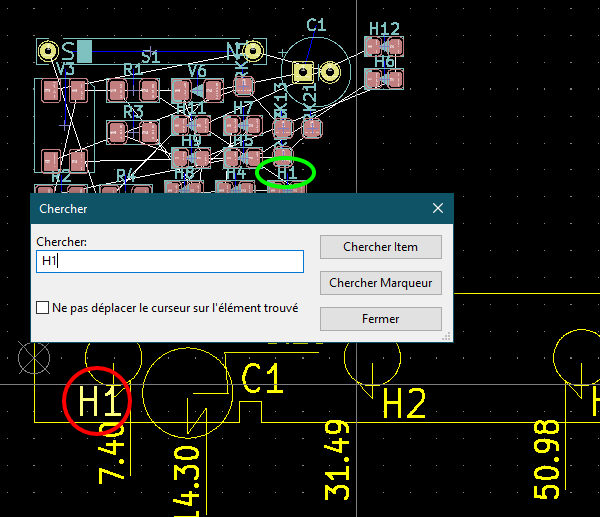 It is thus ready to be moved, using the M key (the same as in the diagram editor, this is not always the case).

After selecting a not too small grid pitch (red arrow), I move the pad to the desired location. 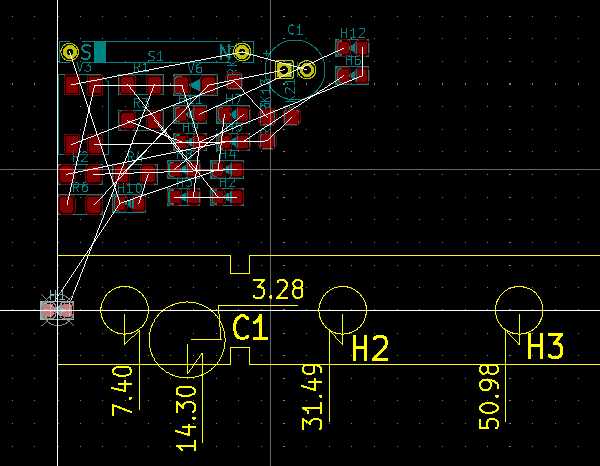 I show you the current displacement of the capacitor, then its rotation: 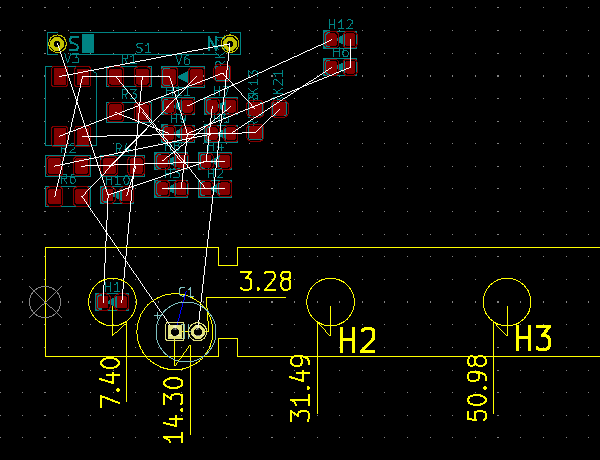 For the LEDs that must be placed precisely, I change the grid pitch, decreasing it in X but keeping it large enough in Y, since all the LEDs must be aligned on the X axis. I scroll down the Grid list, I select Edit user grid… and I put the smallest possible value in X. 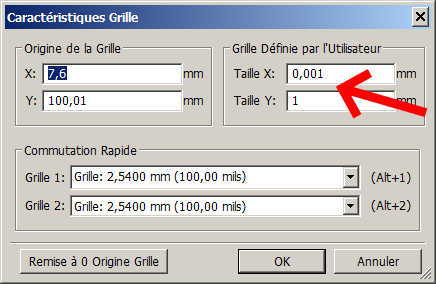 This setting, plus a large zoom, facilitates precise placement. 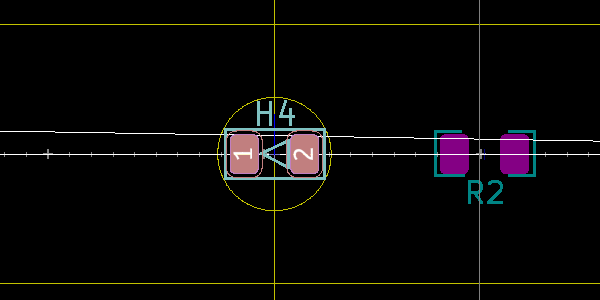 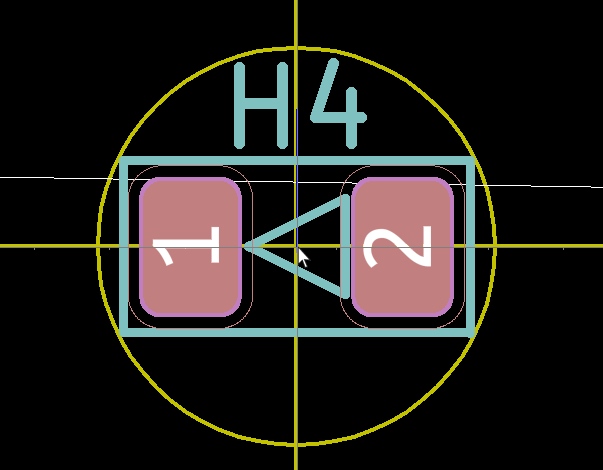 Place devices on the other side of the circuit

The LEDs and the capacitor must be located under the board, the other devices above. For the moment, everything is above. To change a device’s side, just press the F (Flip) key. So let’s put the LEDs under the board. We see that the texts are reversed, which is logical. 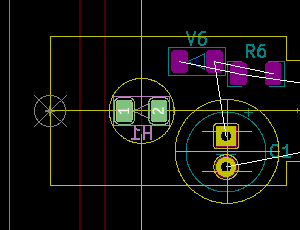 What is less logical is that the side change, which is in fact a rotation in space, is always carried out along the X axis, regardless of the position of the devices. So a polarized device (diode, capacitor) will see its polarity reversed if it is arranged vertically, along the Y axis. This can be annoying especially if we have already routed the traces. 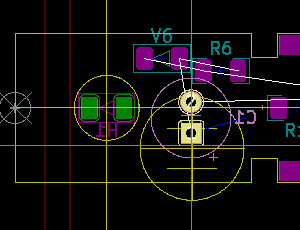 Here you have to press R twice, so make two 90° rotations to find back the correct position. 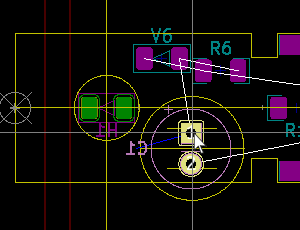 First of all, we have to decide the trace width. The default, 0.25 mm, seems a bit weak to me (old reflex from someone who etches — etched — his circuits himself and who fears that such a thin line will be eaten). I choose 0.5 mm. This value doesn’t exist by default: you must type it in the box that opens when you click Edit predefined sizes. 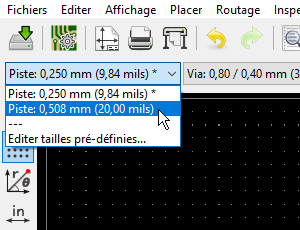 Then, we must (1) designate the copper layer on which you are going to draw, F.Cu (front) or B.Cu (bottom), and (2) click the Route trace button. 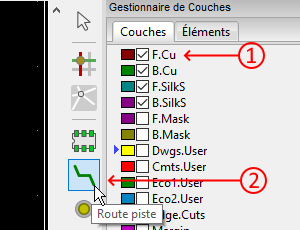 To draw the traces, it is obviously necessary to be based on the ratsnest. It is best to start with the shortest and therefore most obvious links. Here we are going to connect series of LEDs and resistors. But since some are above and others below, we will have to go from one side to the other by installing vias, which are small diameter holes used to make the two sides communicate electrically.

I start by clicking the starting pad, which is on the top side. When I reach halfway, I type V: a via appears. I can move it if necessary then I click at the desired position. 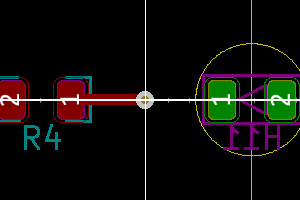 The trace then automatically changes sides, and therefore turns green. I finish by clicking the destination pad. Notice the trace highlight. That’s it: the first equipotential is connected! 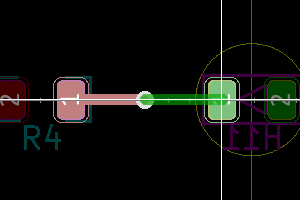 I pass on the continuation of the routing, which requires a certain experience, but which is not too difficult for such a simple circuit. I come to this: