LEDs in series or in parallel?

When you want to light several LEDs at the same time, is it better to connect them in series or in parallel? This issue is the subject of major discussions on some model trains forums.

If you connect them in parallel, the currents in each LED are added. You’ll tell me that it is not much. But the small streams make the great rivers: I have Rivarossi cars whose lighting consumes 190 mA! It feels like every compartment is equipped with a motorway high-pressure sodium-vapor lamp! A train of ten cars would pump almost 2 A, three times more than the machine that pulls them!

And it requires one resistor for one LED. Of course! LEDs, as all semiconductors, have very dispersed characteristics, and not only since they are made in China, as some sharp tongues claim. It is a fact that a very slight difference of dosage in their manufacturing (this plays within the millionth!) greatly modifies their characteristics.

It is possible to obtain components with tighter tolerance, but this is achieved by sorting, and this sorting has a cost! If you connect two apparently identical LEDs directly in parallel, chances are that they’ll not illuminate with the same intensity.

So, look at this picture from the excellent site Biscatrain: the three LEDs were connected directly parallel. The one on the right clearly illuminates less than the others. You’ll tell me that in reality, too, there are differences… 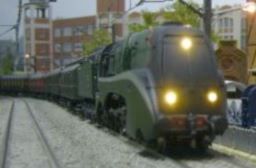 In series, the voltages add up, the current is common to the whole circuit, and it’s a single LED’s. And you put a single resistor in series with the set. Of course, if a component breaks, the whole circuit is down. But it is very rare with LEDs, especially since they are generally underpowered because they illuminate too much at their rated current. Here, the total current is only 5 mA. To check the values, see the previous page. Did you guess my favourite solution? 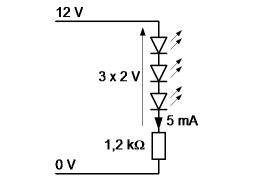 However, honesty requires me to say that connecting LEDs in series is difficult to apply in the case of an “analogue” layout, because the minimum voltage necessary to turn on the LEDs would be too high. The train should therefore run very fast for the lighting to work. Difficult? Hem, not so sure…

It is essential to know the direction of a diode, to polarize it (i.e. apply voltage) in the right direction. For a simple diode, the marking is quite clear. But for an LED, it is not. If it is a new wired LED, the anode wire (the +) is longer than the cathode (the –). There is also sometimes a flat on the collar. But what if the wires are cut? Or what if the LED is a SMD? For the latter, some cases have a cut angle to show the orientation, but it is necessary to refer to the manufacturer’s data to be sure of the direction. Sometimes the case is so small that a single stroke (or nothing at all) can indicate the polarity. I even saw SMD LEDs whose marking was a triangle, but opposite to the diode symbol! Then what to do? 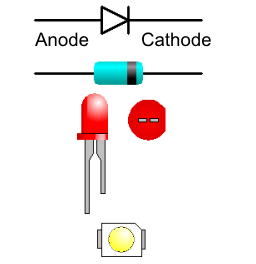 If you own an electronic multimeter, which I highly recommend, it surely has a diode test position. If the indication is a few volts, the diode is connected forward (provided that the red tip is connected to the red terminal of the multimeter, and the black tip to the black terminal). When you reverse the connections, the display must indicate infinity (unless the diode is breakdown).

For the moment, I have only spoken of diode tout court. The test is valid for an LED, but it is even more convenient because the multimeter will give you the direction of the LED without even looking at the multimeter display: when you do the test, if the LED lights up, it is forward. And if it does not, it is reversed. No risk of LED breakdown, given the low voltage applied to it. Alternatively, if the LED doesn’t light up in any direction, then it’s dead!