A tachometer for model train (1)

I present here a gadget that has been described several times on the Web. Then why talk again about it? It’s only with the aim of showing as simply as possible what can be done, and, for non-mathematicians, explaining how the data to be applied are calculated.

The main interest in measuring the speed of a model train is to set the digital (DCC) CVs (configuration variables) and in particular the CV5 (maximum speed), so that the reduction speed is in conformity, to scale, to the prototype’s. I will not enter into the discussion of whether to increase the speed relative to that strictly to scale, to give a better impression of reality. It’s up to everyone to decide. Moreover, it is probably more the accelerations and decelerations than the top speed that give realism to a model train.

But where this tachometer really helps, is when you want two or more motor vehicles to work in MU (multiple unit). This is the case, for example, for two EAD (Element Automoteur Diesel) railcars or two BB 16500. In the latter case, although equipped with the same decoder with the CV5 set to the same value, the two machines did not have the same speed — difference due to the engine I suppose — with all the risks of mechanical fatigue associated: transmission, tyres. And the test method - comparison - modification was painful. With the tachometer, it’s much faster!

The base of the device

Then what to think about it?

In fact, what matters is not the linear speed (in km/h or m/s), but the rotation speed of the wheels, which is usually expressed in revolutions per minute (RPM). Now, in the case of the train, real or miniature, the wheels rotate at the same speed! Of course yes! You don’t believe me? Then you will have to make calculations, you requested it! If you do not want to, go directly to the Tachometer Operation box. Don’t go to Jail..

The formula that links the linear speed V (in metres per second), the rotation speed N (in revolutions per second) and the diameter D of a wheel (in metres) is:

Of course, this formula is demonstrative, but you won’t mind giving up the demonstration, will you? Note that pi × D also represents the wheel circumference.

For a model, we apply a factor k (the reduction scale, for example 1:87) to the speed V at the numerator of the above fraction, as well as to the wheel diameter at the denominator of this fraction. The model speed becomes V × k and the wheel diameter D × k. However, we learned at high school that in this case we can simplify the fraction by this common factor k. This means that N is independent of the applied scale.

A train whose vehicles have 1 m diameter wheels runs at 200 km/h. Raised in metres per second (as for the world record train, named V 150 by technicians, for 150 m/s), the speed becomes:

We are more used to revolutions per minute. Therefore, let’s multiply by 60:

Starting from the fact that the wheels rotate at the same speed, regardless of the scale, I wondered why our models require a reduction ratio between the motor and the wheels much larger than in reality. This is simply because miniature motors have nominal rotational speeds much higher than the large ones (10,000 rpm or more, compared to about 1500 rpm).

We then must look for a bike tachometer capable of holding the 200 km/h, or even more than 330 km/h for the TGV friends!

Operation of the tachometer

A reed sensor is fixed on the bike’s fork. Opposite, on a wheel spoke is attached a magnet that will actuate the reed at each turn. The receiver attached to the handlebar will simply count the received pulses and translate them, through a microcontroller, into information of distance travelled and speed. But, to do this, it needs an indispensable information: the distance travelled per wheel revolution.

Choice of the tachometer

I first bought a wireless model, the cheapest possible of course (SSIGMA BC 8.12 ATS wireless), thinking to hold the display in hand while the transmitter placed on a wagon would circulate. But I quickly realized that, in order to operate, these two elements had to be aligned in a very particular way, as indicated in the notice. What was possible on a bicycle fork was not on a train layout! So, I mounted it on my old bike, and I bought the wired model (SIGMA BC 8.12 wired). 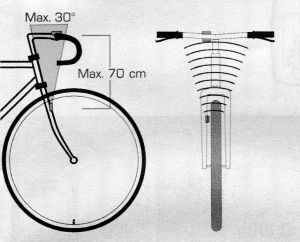 It should be easy for an electronics technician to replace the cable with a relatively low cost 433 or 868 MHz radio transmitter / receiver pair that can be found at Aurel for example. The only complication would come from the supply voltage of the components (the tachometer uses a 3 V battery, the modules require a voltage close to 5 V). But we get away from the criterion of simplicity that I had set myself at the beginning.

Information provided by the tachometer

The SIGMA BC 8.12 model can display the following data:

Interesting features not provided by the manufacturer

There is a way out for speeds above 200 km/h: use the shunting mode of the decoder, if provided of course. In this case, the speed is divided by 2 and the CV5 can thus be adjusted to obtain, for example, the value of 150 km/h for a vehicle capable of running at 300 km/h.