Servos and their installation (continued)

The first picture shows the turnout control by the upper crank arm. Admit that it’s discreet and easily concealable, even if it doesn’t reproduce the actual mechanism. The original holding spring is removed. Anyway, it jumped every time I cleaned the track! 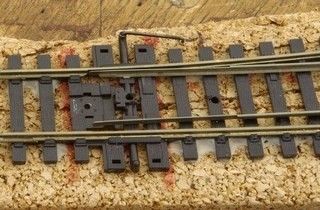 Click the picture to see the transmission more closely.

The second picture shows what is behind the scenes, with, left to right, the servo, the Peco switch embedded in the PCB, and the terminal block. The red and black wires belong to the DCC feeder; the yellow one is connected to the turnout frog; the blue one, connected to the yellow one and therefore to the frog, is the wire returning to the console, which allows to light the LED indicating the position of the turnout. The terminal block can be unplugged to allow an easy removal of the support in case of problem. 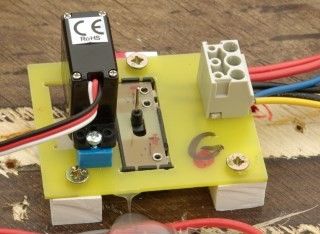 To install the bracket with sufficient precision with respect to the pivot hole, I made an aluminium drilling and alignment gauge. 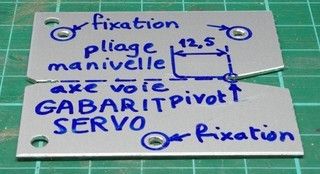 This experiment is underway. The advantages of these microswitches are their reliability (they equip the mice’s buttons), their small size and low price (around €1.5), and also the relatively large switching current, from 3 to 5 A. Do not forget that short circuits may occur on a turnout. Their disadvantage is related to the very short pusher stroke: the setting is therefore delicate. Here is a short video (53 s) on the subject.
Show video (2.6 MB). 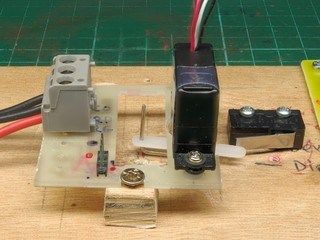 The Peco switch has been removed (the useless terminal block remains). The microswitch is fixed on the table, which would not be practical in real situation.

A Switchpilot Extension module can be connected to the Switchpilot Servo for switching the turnout frogs. It connects directly to the previous one, and has four outputs (one per turnout) with dry contact dual inverter. The switching can be set either immediately upon the command receipt or with a delay to take account of the turnout travel, with CV 49 = 15 to indicate that all four servos are concerned. But the delay itself is not adjustable. 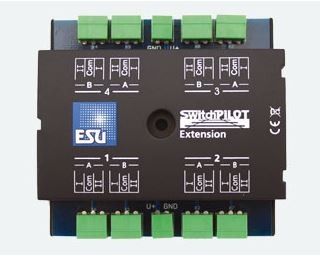 I bought such a module because I had difficulties with one (1 out of 7) of Peco switches, which switched randomly. This module works perfectly, but…

…but there is a big drawback: this module does not reflect the exact position of the turnout; it only indicates that the position change order has been received. If, for example, the servo connector is unplugged or has a wire cut, it will not move, and yet the turnout frog will be switched and the control panel LED will light up. So, it’s not a safe device. And this is not unique to the Switchpilot Extension, but it is also valid for the other solutions mentioned on page 2, namely the Smartfrog and the Frog Juicer.

With a switch operated directly by the servo, this type of incident could not occur. The only possible fault would be an incomplete point blade closure due to an obstacle such as a misplaced ballast grain, like in this video from a 1950 SNCF film on safety. Show video (3 MB).

But to avoid this, it would be necessary for the switch to be linked to the actual position of the points, which appears difficult on a 87th scale. Difficult, but maybe not impossible…

Indeed, not impossible. That’s what I just tried some five years later… How time flies! I bought micro-switches a long time ago rated at 3 amps, even smaller (12.8 × 5.8 × 6.6 mm) and cheaper, at Conrad, but they can also be found, a little less expensive, and of great brand, at TME.

Let me explain in detail how I implanted one on my test set. Show video (80 MB).

This time, we have an actual positive checking of the turnout control, i.e., if the controlled turnout does not move properly because of a transmission failure or a blockage due to a foreign body, the frog’s power supply will not be switched, and the signalling at the desk will not change, at least in one direction of actuation. 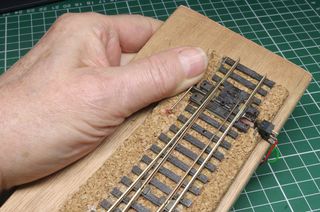 Here, the additional disadvantage mentioned above concerning the delicate adjustment due to the short microswitch stroke does not exist anymore, thanks to the transmission flexibility: in case of jamming, the servo can still run without risk of breakage.

To get this control in the opposite direction, we must add a second microswitch on the other side. This is perfectly feasible, even if, despite the small size of these devices, it can sometimes pose implementation difficulties. But I did it anyway, studying another implementation of the microswitch, more logical, horizontally. This allows using the switch’s fixing points (with screws of a diameter less than 2 mm, for example these), and the microswitch does not jut out above too much (5.8 mm compared to a 5 mm ballast thickness). If the ballast is thinner, commonly 4 mm, we can consider a recess. Video coming.

In this case, only the NO (normally open) contact of each microswitch is wired.

Here is the electrical diagram corresponding to the last case intended. The microswitch S1 controls the turnout “straight track” position, while S2 controls its “diverging track” position. In the drawing’s first position, S2 is actuated by the throw bar of the turnout; S1 is at rest.

In the case of a single microswitch, S1 does not exist, and the wire which leads to its NO terminal is connected to the NC (normally closed) terminal of S2. Note that the single microswitch diagram is only acceptable for a voltage as low as that of the DCC (20 V max). Indeed, the NO and NC contacts are so close to each other that for a higher voltage, a permanent arc might be established between the two, leading to more or less quick destruction of the device.

Here is the setting-up of two microswitches per turnout, on two Peco curved turnouts. This time, the microswitches are therefore arranged horizontally, directly on the track support.

Their lever is too low relative to the turnout throw bar, which has led to solder a perpendicular nickel silver salvage plate. Concretely, while I solder this plate, I don’t know on which side the microswitch will be installed. This plate is therefore placed to protrude on each side. It will be shortened “on site”. 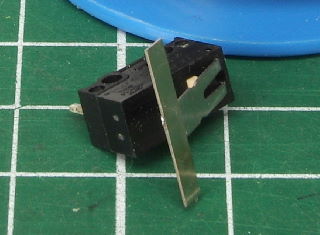 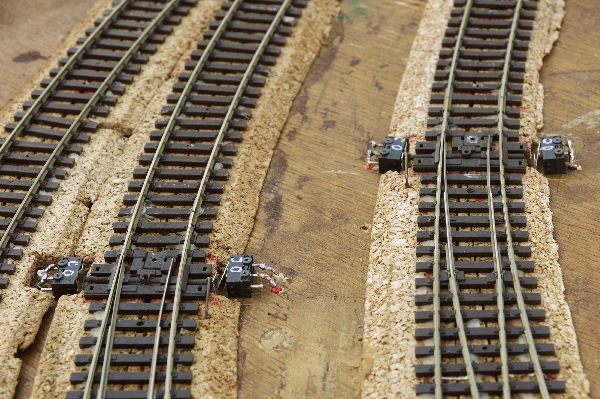 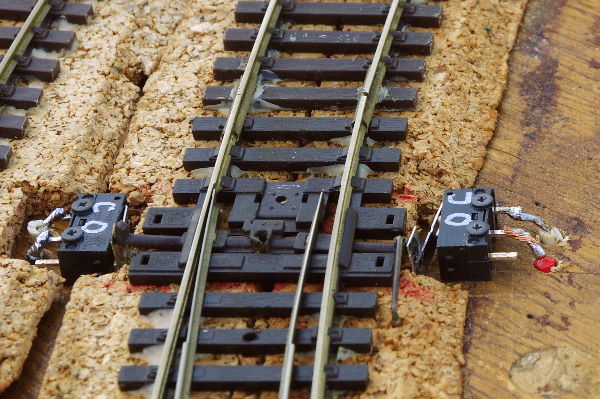 Move the cursor over the image to see the details.

Direct consequence of this installation: I no longer need the Switchpilot Extension!