Having at my disposal a Schneider Electric (ex-Telemecanique) brand programmable module, Zelio type, (it is in fact a mini PLC), I wanted to try it for this application.

It’s a rather simple device, equipped with several inputs and outputs (their number depends on the model). It is powered by 24 V DC. This can be done by using a 15 V rectified and filtered transformer output, which gives about 21 V, a voltage which is perfectly suited to the module (consumption is low). 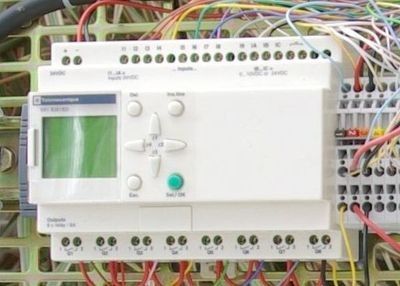 It can be programmed in several ways, either directly by front keys, but this is not very handy, either by computer, the program being transferred through a serial cable. Much handier, except that finding a serial port in a recent computer is not easy. So, in addition you have to provide a USB / serial converter (an adapter cable is available to the manufacturer of my module, but it’s overpriced).

A starter kit is available, including a 12-input / 8-output module, a serial link cable, a CD-ROM containing the Zelio Soft program, ref. SR2PACK2BD. See prices on the last page. Do not rely on the Radiospares online catalogue page which claims that the connecting cable is an “indispensable accessory” at €82.40! This cable is included in the pack.

There you can find contacts, either normally open (NO) (I1, I2 for example) or normally closed (NC) (I4), which are in fact actuated by the module inputs, and relay coils (SQ1 for example) actuating output contacts, here Q1.

When two contacts are in series (case of I1, I2), they form a logical AND: in order for the relay coil SQ1 to be energized, I1 AND I2 must be closed at the same time. When two contacts are in parallel (case of I3, I5), they form a logical OR: for the current to pass, it is enough that I3 or I5 is closed (of course, if both are closed, it also works). Finally, a normally closed contact (I4) forms a logical NO (negation): for the current to flow, the contact must NOT be actuated. Finally, in the example, the coils SQ1 and RQ1 are controlled as follows:

To simplify this writing, it has been agreed to note AND by the sign •, the OR by the +, and the NO by a bar placed above the letter, so we write:

The S is for Set (set to work) and R for Reset. This simulates a so-called bistable (latching) relay, which has two coils, one to actuate the contacts (and they remain actuated even if the coil is no longer energized), and the other coil to de-actuate them. This makes it possible to change a pulsed command (briefly pressing a push-button) into a so-called maintained command (such as that of a switch which remains in the last position it was put).